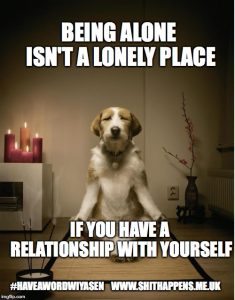 Trying to save some me time, in a time when there doesn’t seem enough hours in the day lately and I know it’s going to continue at this pace for the next two months.

The saving grace is I knew it was coming so have prepared the best I can, such as getting the Christmas presents out of the way early, because I know if I left it like last year I would have been running around like a fucking demented lunatic, wrapping not just presents but tying up the previous years works lose ends and preparing for returning to work in the new year ready for the Best Bar None Awards in February, which will also see me running around like a demented freak in January trying my best to ensure none of the 250 people who have booked their place at the awards night goes home in a taxi and not an ambulance from anaphylactic shock because I got the orders and table plans wrong.

I want to enjoy the Christmas break this year, I don’t want to be sat around using the break to destress, because hopefully, I will be more relaxed because I have managed to maintain a degree of self-management over the previous two months. whilst I know there are some stressful couple of weeks ahead, what is reassuring is I’m not half as stressed or worried about the challenges that lay ahead. I genuinely believe that has been down to taking time out and #havingawordwimesen on a daily basis.

Yesterday was day one of what will be a few more weeks of intense work for me and whilst I know it’s going to be stressful and busy, its days like today that restore my faith in doing what I do. In preparation for International Day for the Elimination of Violence against Women, 25th November, to launch our new Domestic abuse strategy on the following day. Can I just say that I also think this day should also include MEN  but hey I didn’t organize it the UN did?

Jenny Ells a reporter with BBC radio Sheffield came to meet and talk with three AMAZING women who are part of a small group of domestic and sexual abuse survivors who are using their personal experiences to effect change for other people, I say people I mean both men and women, after being involved with this group for the past 4 years the impact and influence that these survivors have had on Sheffield’s new strategy, whilst subtle is also very impressive. over the years the focus has shifted from responding not just the crisis, but also the long-term support and recovery needs of individuals who quite frankly have been to hell and back. I knew little parts of these ladies story’s, but not the whole story, so when I was sat there yesterday listening intently how actually all three of them fled domestic abuse from their hometowns, from other countries and found themselves in Sheffield seeking sanctuary was nothing short of a fucking miracle and I am not exaggerating here.

I won’t go into the details because quite frankly whilst their stories and past lives have been horrific, the most humbling part of the whole meeting was hearing how EVERY single one of them talked about the one thing they all had in common, and that was as a result of their experience they all had gone through a very personal journey of learning to find out who THEY are…

Today is a short one, but I just wanted to share with you a little of my morning yesterday and these ladies and the other people I have the privilege to work with makes working with all the other Fuckwits more bearable.

#onelife #youcount #haveawordwiyasen – before its too late, time stops for no man OR woman.