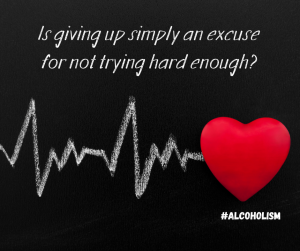 This has just popped up on my memories, I came across it four years ago Alcoholic, 41, given a lethal injection because he saw death as his only option. I still remember how the article unsettled me at the time, I even shared the post posting ‘I’m on the fence with this one’. However, after hours and hours of writing since first coming across the article, I now know why it unsettled me so much – So here is me pushing my ass off the fence.

Mark Langedijk’s life had become ‘a hopeless cocktail of pain, drink, loneliness and sorrow’ His sister Linda talked in the article about how after multiple attempts to get clean, his brother had, had enough. He had given up.

I could empathise with Marks story and his sister Linda, and it saddened me that Mark felt that euthanasia was his only way out. But what angered me the most was the quote from the MP Fiona Bruce, co-chairman of the All-Party Parliamentary Pro-Life Group, who said ‘This news is deeply concerning and yet another reason why assisted suicide and euthanasia must never be introduced into the UK. What someone suffering from alcoholism needs is support and treatment to get better from their addiction – which can be provided and should not be euthanised.

‘What someone suffering from alcoholism needs is support and treatment to get better from their addiction.’

I re-read it and re-read it, for me that line implies that there is always a solution or that Alcoholism can alway’s be fixed and I was incensed. My Dad was already committing slow suicide, we knew it, and towards the end, he did too, and I’m sure if he had the option, he might have taken the same route. He would often remark ‘they wouldn’t let an animal suffer like this’ every time he was released from another hospital admission. His wasn’t a life. It had become a constant cycle of being admitted into a hospital, going through painful supervised detox’s, only for him to be released, each time his body becoming frailer. He was a quarter of the man he was two years earlier; trust me this wasn’t a life.

Drinking is like playing Russian roulette, and nobody ‘really’ knows where that often invisible ‘fine line’ is. I don’t know when things changed for Dad. Who once used to enjoy a social drink to swapping his usual morning mug of builder’s tea to drinking a mouthful of Jack Daniels from his tumbler which would often make him wince, especially when his lips were cracked from dehydration?

I cannot pinpoint the time when there seemed to be no turning back for Dad? I’d overcome my addiction demons; I’d been working in the substance misuse field for over 15 years. Some amazing recovery stories surrounded me, people who had overcome some past severe trauma and overcome, why couldn’t Dad be like them?

She mentions treatment and support, Christ. It wasn’t like we didn’t try; I’d tried and failed on endless occasions to get Dad to services. I had wanted to get him to meet other people who had suffered from addiction and were now coping, hoping that it would help inspire him, show him that there was more to life than the bottle of fucking Jack Daniels. But he would point blank refuse, claiming he wasn’t an alcoholic. This is the same guy who wouldn’t take paracetamol because it wasn’t good for his Liver, whilst at the same time drinking his beloved poison.

Only the other day, my sister and I had been reminiscing about just how bad Alcohol had taken over Dad. We also talked about someone else we both knew who had recently lost custody of her kids all because of her drinking. She was deemed incapable of caring for her kids because of her alcohol-induced actions, which was sad because we both know that she loves her kids dearly. Some people would say she must love to drink more than her kids? I know I often wondered the same about Dad? Did he love to drink more than he loved us? Or if he really loved us, he would stop putting us through this endless pain. But the sad part was he’d fallen out of love with himself? I have often wondered if he ever loved himself.

I know the cycle of change well, pre-contemplation, contemplation, preparation, action and finally maintenance. Fuck me I’d been around the loop me sen a few times and so had Dad. Still, at some point, after endless relapses, he stayed stuck there. He got stuck at what uncommonly known as End-stage Alcoholism.  This is the point where the Alcoholic is experiences severe health and mental issues and a higher risk of death. I never gave up on Dad, I held onto the only slither of what hope I had right up until the end, but the reality was that Dad had given up on himself and there wasn’t fuck all I could do about it.

Now before anyone gets this twisted, I am NOT advocating that we should be encouraging euthanasia NOR am I saying we should NEVER give up on ourselves or our loved ones suffering from addiction. But what I am saying is we should never judge another person’s personal decision everyone regardless of who they are has the right to choose how and when they decide enough is enough.

One thought on “Is giving up simply an excuse for not trying hard enough?”