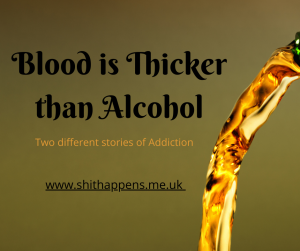 Well, it’s been a fucking crazy year hasn’t it? who would have thought this time last year, some of us would be having to self-isolate at home and especially over Christmas. I however, have found myself embracing the change if I’m honest, COVID has provided me with some much needed ‘time to think’ and has made me realise more than I did before just what’s really important in life.

During COVID I got involved in helping to set up an online support group for families, there are a few of us, who are volunteering to help facilitate the group, being involved has helped remind me about how important it is to recognise the support needs of families and friends affected by addiction.

Best of all the time that would normally have been spent travelling into work on the bus had been replaced with writing time and with the help of the ‘Monday morning Motivation’ writing group run by Beverly Ward  and weekly coaching sessions I finally feel like I am making some progress.

I am nearly halfway through the book, it hasn’t always been easy, but I HAVE found it therapeutic, I am still amazed about how much more there is to learn about myself and how I approach life in general. The book is about two peoples journeys of addiction, mine and my Dads

I thought I would share with you the part of the story. I am at the part of the story when I am starting to really realise that Dad has got a problem with the drink and it’s the start of a journey, I never thought I would be embarking on. I wanted to pay homage in this post to all the families and friends affected by addiction and to also encourage others who find themselves in similar situations to reach out for help, I have also included a link to the video that was made. *Please note this is a draft and will go through another edit*

Dad was back in Sheffield, and I had agreed to go over to see him, he’d had been in Stoke for over a week now. Nan was coming out of the Hospital, which meant Dad would have to move out. They only had a small bungalow. I had thought that Dad might have moved in with Uncle John, to be closer to Nan but he’d decided to come back to Sheffield instead. I felt a mixture of relief and dread. I wasn’t convinced Dad had been any real help suspecting he may have been more of a hindrance based on the pissed up calls I’d been getting from him during the week.

I was planning on going over to see him after work. I was shattered and was already emotionally drained. I’d spent that day at a very posh hotel, called Kenwood Hall. The film crew had hired it out to make the family support film, which was going to take over two days to film. The first day of filming was focused on trying to recreate a support group.

I’d ended having to rope Mum in at the last minute as someone had dropped out and we needed at least five people to make it look like a real-life support group.  We had Eddie – who had two sons hooked on heroin. There was Vera whose son Richard who had been through numerous rehabs to tackle his heroin and crack habit. Vera had also been one of the founder members to set up RODA (relatives of drug abusers), A Support group in the North of Sheffield to support other families in the same boat. There was Joanne – whose brother had died of a heroin overdose. There was Pauline, the poor cow she had two daughters on heroin who had four kids between them as well, and in between all the chaos, she had also managed to set up a small family support group called FADs, (Families affected by Drugs). There was Charlotte who had lost a son to an overdose. She ran a support group called SPACE 2 for families bereaved from addiction. There was another lady who I’d never met before called Steph. She’d heard about the filming and wanted to take part, do her bit to help raise awareness, she had a son who was addicted to amphet and then there was Mum.

My role in the filming had been to facilitate the group whilst it was the room where the filming was taking place was proper posh. The film crew had set up what looked like a mini train rack around the room, to help them film from different angles, everyone was a little nervous but also excited at the prospect that sharing their stories might help someone else.

I had thought asking Mum to step in at the last minute wouldn’t have been that much of a big deal, after all, I’d been clean from drugs for a few years. But that day it had hit home, just how much pain and suffering I’d put her through.

The film crew were all in place. We had all settled into our positions then, the director called

‘Action’ One by one, I went around the room asking each participant ‘when did you first realise that your loved one had a problem with drugs?’

Vera, started us off, then there was Eddie, then it came to Mum,

‘so Gillian, when did you start to realise that there was a problem?’ Mum took a deep breath, I could tell she was nervous,

‘Well she’d lost a lot of weight, her behaviour was so erratic, one minute she seemed fine but then the next minute she would be freaking out, lashing out, it was like she’d been possessed, she really scared us at one point, we even had to call the police. It was like living in a nightmare. You just want heaven and hell to open up together, swallow you all up, you just want someone to just lift you all away, you want someone to take that person from you, do something, whatever it is and bring them back like they were before.’

I hated seeing Mum cry at the best of times and what was worse was knowing I was the person, responsible for her tears. During the break, I had even suggested she leave early, we did have enough people in the end, but Mum had insisted on staying

‘Look, its ok, I’m ok, I promise’ she tried to reassure me, but I wasn’t convinced ‘it’s just brought it all back that’s all, it is heartbreaking to hear some of the other stories, Christ I thought you had been bad, but god! listening to some of those stories’ she shook her head and just stared at the floor.

I felt awful, watching her so upset, I knew I’d put her through some shit with my own brush with addiction, but she had always put on a brave face, I’d never really realised, I would never have knowingly put her through that, but the reality was I had.

‘Honestly Mum, you’ve done your bit, you don’t have to stay and what about work?’ Mum had taken two days last minute annual leave on my account already.

‘Ah sod work love, this is far more important, I know I am crying, but they are happy tears too’ really, I thought you could have fooled me. ‘No Tracey, honestly this is really important, and I couldn’t be prouder of you, look at you now! This is really important and if it means that more families will be willing to come forward for support then the tears will have been well worth it. there was sod all like this when I was going through it just knowing that you are helping others, people like me makes it all worth while anyway the coffee’s great here and I am actually enjoying myself.’

God, I loved my Mum, she’d always been there for me, unlike Dad, who only showed up to the Hospital once all the time I’d been in there. He’d been more bothered about hunting down the drug dealer that I’d bought the drugs off more than he was about me, who was sat emaciated in a mental institution with me head up me arse, he’d never even questioned once why I might have turned to drugs in the first place.

But that was Dad all over, parachuting in and out of my life when it suited him, his mates, his birds and his big macho ego always came first. And now he had none of that. He was on his arse sat getting pissed waiting for the ‘BIG PAYOUT’ that he claimed would put him back on his feet. I was torn, ! I knew Dad was hurting, but I didn’t feel sorry for him, I knew deep down that apart from being there for him when he needed a shoulder to cry on, there wasn’t much else I could do to help, I couldn’t fix this the only person who could do that was Dad.

Ps, I am aiming to finally have it completed by May 2021

In the meantime, I hope you all have a very Merry Fucking Christmas and get ready to smash 2021

Remember, try not to be afraid of who you truly are, be proud of your recovery and remember, if you would like to subscribe to more posts, please go to https://www.shithappens.me.uk/contact/ and sign up for emails.

Oh, and If you liked the post please share it on social media and with friends  – and if you didn’t like it then do nothing that’s ok too