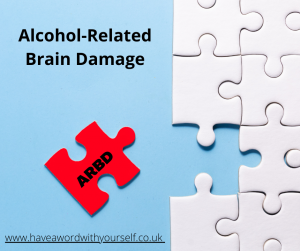 Well that was until recently

We are familiar with terms such as intoxication or drunkenness; however, these terms are rarely associated or linked to brain damage. I had heard about Korsakoff syndrome, a chronic memory disorder associated with alcoholism. All the signs were there with dad, but he was never formally diagnosed. Moreover, over the years, I have heard about ARBI (Alcohol Related Brain Injury) through my work with the homeless. However, I always attributed this to being physical due to a fall or multiple falls, something we all know is a high risk for intoxicated people.

I recently attended an ARBD and Capacity Seminar over zoom, which was hosted by the ARBD network. Click here I was at the meeting professionally, but it quickly turned personal.

I sat patiently as guest speakers, leaders, and experts in ARBD shared anonymised case studies about people diagnosed with ARBD. I listened intently, trying to hold back my emotions as they shared their findings. It immediately struck me that they ALL could have been talking about my dad.

I heard about case study A, who struggled to retain information that you might have told him only minutes earlier. Or case study B, who just like dad would tell stories, which I knew were riddled with untruths, but he truly believed every words. What was worse was if you questioned him because he would get defensive. I now know this to be called confabulation, another common feature of ARBD.

The session ended, but my mind didn’t; it went into overdrive. In fact, I was reeling for days after. I went back and re-read some of the chapters from the book. I re-read the parts about how insane dad’s behaviours had become. Dad had a deep mistrust of doctors, in his eyes they were just part of a bigger conspiracy, he reckoned that doctors were the worst offenders for a tipple, so who were they to tell him about his drinking! Dad had grown up surrounded by drink, my grandparents drank, they ran a pub themselves for a while. Dad had done all his socialising in pubs, he played darts and featured as one of the top players in his league. In his eyes, he’d drank for years without it being a problem and couldn’t see what all the fuss was about. The most frustrating part was, despite all the insanity, dad could be pretty plausible when he needed to be. This was especially the case when he was in the hospital. The medical staff constantly overestimated his cognitive capacity and would discharge him, saying he had capacity.

Sometimes, I felt like banging my head against a brick wall, constantly challenging the assumption that dad ‘chose’ or ‘liked’ this lifestyle. No one asked the question or tried to understand, “why isn’t this person changing?”

Some people assumed that I cared for Dad out of pity or guilt, but it was never just that. It was that gut feeling I carried around with me. It was always hard to describe, but it was always there, telling me something wasn’t quite right. And now, after 17 years of questioning myself, I believe that I have finally found the missing piece of the jigsaw. And I’m absolutely convinced that dad had some form of ARBD.

So, what is ARBD?

Alcohol-related brain damage (ARBD) is a brain disorder. It is caused by a person regularly drinking too much alcohol, or binge drinking, over several years. Men drinking 50 units or more a week for 5 years or longer are likely to have some form of ARBD. Christ, my dad had been drinking more than 50 units for as long as I can remember. The pub wasn’t dads second home; it was his first. In fact, he was drinking more than 250-300 units per week towards the end of his drinking career. People who get ARBD are generally aged between 40 and 50 – dad was 55 when he passed. And also, multiple withdrawals from alcohol have been associated with longer-term brain damage and changes in intellect or cognitive damage – I have lost count of how many withdrawals he went through

Also, while at the seminar, I learned about the importance of Thiamine

Looking back, I can clearly recall one day when Dad was discharged from the hospital. He had been given numerous prescribed bottles of medication that he had to take to aid his recovery. One of the bottles was Vitamin B. I remember thinking to myself

‘Really, Vitamin B, what the fuck is that going to do?’

I now know that up to 80% of people with an addiction to alcohol develop thiamine deficiency and that Vitamin B is how it is treated and that Thiamine plays a key role in the maintenance of brain function around thinking, reasoning, and memory.

One of the main problems with ARBD and being recognised is also hard to diagnose. It requires a good clinical history from the individual when they are not under the influence or withdrawing from alcohol, which in dad’s case was rarelyBut what sticks in my throat is knowing that ARBD is preventable AND Treatable. You can listen to Debbie’s story  here

I will never know for certainty had the treatment offer and options been more flexible for dad if he would still be here today. That question sits alongside a list of many other unanswered questions. But what I know is that something radical about society’s attitudes and our treatment approaches toward alcohol dependency needs to change because this issue isn’t going away.

We need to challenge the notion that nothing can be done to help problem drinkers who do not have the capacity to change. And we need to do more for this forgotten group of patients desperately needing recognition, treatment, services, and support. And I am proud to say that Sheffield is doing just that, I talked about this in a recent blog What about the 89%?

Learning about ARBD has profoundly impacted my dad’s story, so much so that I have felt tempted to rewrite it, but I can’t. Mainly because I am writing it in the past tense, and I didn’t know anything about ARBD back then. But I CAN make sure that there IS some information about ARBD in the back of the book and, at the very least, share my story and newfound knowledge in this blog to try and raise as much awareness about this much misunderstood issue.

I have also been asked by the ARBD network to participate in a Podcast and share mine and dad’s experience with Dr Ken Wilson, who leads on the work of the network, so I’ll share this once it’s been published. I hope have found this blog useful and remember I don’t write for financial reward or gain, I just want to help share my lived experience with others in the hope that it helps.

And I just love to write, so if ya fancy getting the occasional email (NO SPAM) with the most up to date blogs from yours truly, please feel free to subscribe at the bottom of the main page.

4 thoughts on “Ever heard of ARBD? (Alcohol-Related Brain Damage)– Nah, me neither”