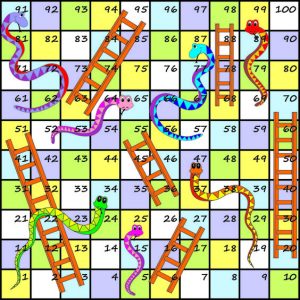 Life quite simply is like a game of snake and ladders, the question to ask yourself today is….

Morning, just on me way to a conference to talk about the work partners in Sheffield Help us Help  have been doing around raising awareness to the general public about the people they see who are visible (mainly in the city centre) but who can look vulnerable or intimidating, you might refer to them as ‘street drinkers’ or ‘drugaholics’ a phase I know someone uses to describe people who are hanging outside an off licence in town either begging or in small groups being loud and rowdy.

Anyway, this morning I was being picked up early, so I set me alarm earlier, so I could get me morning run in.  Whilst out running (ok jogging and the odd walk) an idea / concept came to me.

Well I’m lying, the idea came to me last year, I designed some domestic abuse training for new staff, who were part of a new multiagency team to work with families, including the victim, perp and children affected by domestic abuse. The I’d designed the whole training session  around the board game “Snakes and Ladders” YES you heard, me “Snakes and Ladders” and cycle of change.

It got me thinking, I’ve been looking for a metaphor that could be used to describe how we can deal with life on life’s terms, a common sense approach, because lets be honest the worlds gone fucking mad.

When older generation say “hey it weren’t like this or like that back in my day” well it wouldn’t would it, we live in a completely different place now compared to, 10, 20, 30, 40, 50 friggin years ago.

Whilst our environment around us ‘human’s’ might have changed, personally I don’t think, us as humans have or are adapting as well as well could. Life is complicated regardless of you you are, where ever you were born, where who ever you are.

Back to the game

ANYONE can climb the ladder, and anyone can slide backwards. this might be self inflicted or out of your control. But, regardless your still a player in the game, you can chose to either, say safe (what ever that means to you) and stay where you are “Spit ya dummy out”and refuse to play OR you can dust yourself down and play this crazy world we call LIFE!

More often than not, the only thing that is stopping us from participating and playing are our own limiting beliefs, YES you heard it YOU.

Right that far too much fucking thinking for me today, BUT I do intend on expand and talk more about the ‘Snakes and Ladders’ metaphor