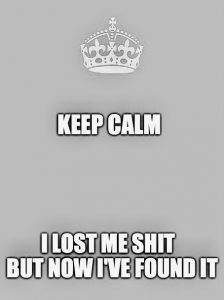 I took a break from drinking alcohol socially over 24 days ago now (thats not to say I’m NOT DRINKING AGAIN) But the main, fundamental reason I wanted a break was to ‘find me again’ . Over the past few years the only time I ever really got to myself to relax and not think about work, life etc, was the weekend.

However, for the past, christ knows how long, my weekends have been spent trying to relax, but its hard to relax, when I was fucking hungover and crap. And then theres the ‘dam book’ getting around to writing ‘that fucking book’ for years and despite attempts to make a start, they have always been half hearted, because in order (I think) to pore my heart out about some personal crap, will require me to be in a good place AND it helps if your not hungover and feeling CRAP.

I think I have known and felt this way for a while, but could never put my finger on what was missing.

So during the first 22 days, I honestly have to say, I have never felt better physically and mentally, whilst its felt different, the way I feel about myself is 1000 times better than I have done in years. I have realised what was missing was “having a relationship again with me”. I’d started to prioritise me! and by not drinking, I’d given myself the space to ‘think about me’ .

In the 4th of July’s post, I talked about life being like ‘A game of Snake and Ladders’.

I have recently had a couple of shit, crap, wank days this week, that made ‘me’ feel crap about myself. How ever after some ‘me time’ reflection I can now see how I had allowed this to happen.

And, yes I said “ME” even though there were some external factors, incidents that had happened. I didn’t like how I was feeling and realised that the past couple of days, whilst it had been going through the motions, I had stopped #Havingawordwimesen

So it was time to #Haveaword, this started off by asking myself, what happened that ‘I’ had allowed to piss of off over the past couple of days?  Looking back

Soooo….. I had a couple of meetings at the beginning of the week, of which I felt uncomfortable about dealing with, (it would appear I was probably more anxious about them than I thought).

I got the first one out of the way and felt better, relieved and  relaxed again.

Then I returned to my desk to be told the admin worker called in sick, I did feel gutted because the consequences was that, that day there was a deadline to be met, which meant I would have to do it. But at the time though,  I reasoned (#hadaword) with myself, ‘ok, its happened, there is nothing I can do about itI will just have to do it’. So I re-priorised my work and cracked on with the task in hand.

So what with managing,  juggling and troubleshooting other work related issues, I did leave work that day feeling drained from being under pressure. I was physically and emotion knackered by the end of Monday, so went to bed early too get some rest for the meeting that lunch time that I was ‘really dreading and anxious about’

I had prepped for the meeting, I had all the information at hand, I was struggling to prepare myself for having to deal with the person chairing the meeting.

In a nut shell, he’d previously been publicly derogatory and had made some flippant remarks about one of the projects I’d managed, however as I wasn’t at the meetings when he’d aired ‘his’ flippant remarks I obviously wasn’t able to defend or respond. SO basically I knew, that should he start making flippant remarks, whilst I was present, I would have NO choice but to challenge it.

On route to the meeting I was constantly #havingawordwimesen, reminding myself that…

Well, after being in the meeting for approximatly 15-20 minutes, he made another similar derogatory remark, like the ones he’d made at previous meetings, those meetings, where I hadn’t been able to defend back.

WELL its fair to say I LOST ME SHIT, in fact the only part of me losing my shit I recall is saying “I’m sorry, but I am NOT having that!” I honestly do not remember what I actually said.

All I know is that after I stopped, all the eyes in the room were on me, which left me feeling slightly (well a-lot) embarrassed and ashamed of myself. Even though, it was fully justified, I felt (a little better) I had not wanted, nor intended on reacting like it did, essentially I had let him in and allowed him to get to me.

Even though, I would love to have stamped on his fucking head and give him ALL the FUCKS I possessed, the reality is, I would’ve felt better initially, but then what?

I checked in with a coupled of people who were there after, firstly to apologise for my outburst, but also to find out what I had said (because I honestly don’t remember). One said “He deserved it” the other said “all you did was show how passionate you are”, so basically I went OTT.

I don’t like ‘being’ or ‘feeling’ like that person. Yesterday, I came home knowing Pat was out all night, which meant I could use the alone time to #haveawordwimesen, I got out my personal journal and started to write and do you know what? I started to feel a lot better, because after reflecting on all the of the above, I understood why I was feeling ‘SHIT’.

It was because my feelings had been hurt, i had taken stuff to heart and personalised something that wasn’t in fact personal nor intentionally intended to hurt me, but that I had made it personal.

So like ‘the game of snake and ladders,  what I had done is stopped rolling my own dice and had allowed someone else to throw my dice for me… and guess what? “thats ok,.

Sooo, the question you could ask YOURSELF today is who are YOU allowing to throw your dice?