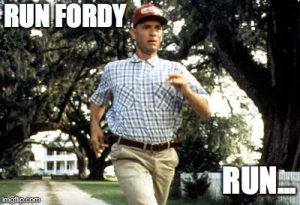 My morning run, takes me on average 25 minutes, the round route is approx. Between 1.98-1.99 miles, (trust me that o.1 counts)  and I normally average between 13-14 minute per mile. I am currently getting 4 runs in per week, alarm on for 5.45am, (but I’m more often than not stirring already). My morning routine, consist of having a piss, which is normally dark orange ffs, Question, ‘Is that normal, considering I haven’t drank alcohol for over a month?’ – advice greatly appreciated in the comments box below…

My old man, Pat, ’I think’ thinks im having a mid life crisis, running first thing, then getting back and tapping away on the keyboard, before work! Fuck me, if I’d been up early previously, he’d have been saying “has tha shit bed?” On account for me being known for liking me sleep, I’m also affectionally known as the “bed slug”, hence why pats affectionately called “Pat the Twat”. (I digress)

So I put me running gear on, its the same outfit for the whole week, same pants, leggings and t-shirt. ‘Yes call me a scruffy git, but at least im not a lazy scruffy git!’ There are actually some benefits to doing this!  a) it cuts down on washing, b) I don’t have to piss about the night before and c) I can just pick them up get dressed and go, plus not fucker smells me !

Next is taking me tablets, theres me, Hay fever tablets, Vitamin D (apparently its good for bone strength, and I need it at my age, cos I aint getting any fucking younger) then my trusty Prozac, which I have been taking for the past 20+ years, 20ml per day for PMT, because trust me, without them once a month I turned into David Banner (The incredible Hulk). More recently this has been upped to 40ml, because I am now Perimenopausal , ‘this growing old malarky, is no fucking joke, is it?’ These are washed down, with plenty of water to also aid turning me piss clear again. Earphone’s in, Spotify on, trainers on (yes same socks all week too), run keeper on, then I’m off and outta the door for 6am.

In addition to helping clear me fucked up head, me morning run is the only time of the day for ‘ME’ no one else benefits, just ‘ME’ I can go at ‘MY’ own pace, listen to what ever music ‘I’ want to, I can run were ‘I’ want, I can chose how far ‘I’ want, its all about ‘ME’.

I don’t start off running straight away, (like I did when training for the half marathon earlier this year) I start out with a steady walk to the top of me road, loosen up (thats my excuse) then I’m off, like Forrest Gump, Zola Bud, Usain Bolt, Paula Radcliffe, you see I can be anyone ‘I’ want when im out running, AND I’m not the only one! There are a couple of others (regulars)  normally going a lot faster than me, but I don’t care, because this isn’t a race for me, its about having some me time.

This mornings run, was amazing and left me smile for the whole run, I still smiling now as I write this, its left me with a happy feeling, that will probably stay with me ALL day. So, I as I reach the brow of the hill and start to descend theres always a couple of people stood at the same bus stop, the same time, every time I go out.

The lady is older, and I would take an educated guess and suggest she is the mother. The guy, younger, in his 2o’s I’d guess, is always stood there with a long white guide stick, one of them with balls on the end. He wears dark glasses so I never knew if he was partially or totally blind. But this morning, as I approached, I treated them, with me usual ‘Morning!’ And the guys said, “excuse me, how far do you run?”I explained “either 1.98 or 1.99 miles”, “Wow, where do you run from?” I explained my route, he was then like “why?” His mother at this point interjected and said “stop with all the questions” I was like “its ok” I turned to him and explained that it sorted me head out before going to work. He said “why what do you do” well I wasn’t going to go into too much detail, we’d have been there all day! “I work with drug users and alcoholics”, he smiled and said “go on then, run you need it I guess” or parted wishing them a good day and trotted off.

As I started jogging again, I thought to myself ‘I’m going to ask him next time I see, him, where he is off too at this godly hour a morning’ . Now I don’t know this guy from adam, he obviously also had some learning difficulties, but that didn’t stop him enquiring. You see there is another lady I often see towards the end of my morning run, I often see her near the local frechi pond. She isn’t running, but she is walking, walking at a fast pace, swinging her arms with a determined look on her face.

I always try and catch her eye to ‘try’ and say good morning, but her eyes never meet mine, although I know she see’s me, cos she aint got no walking stick. I don’t know anything about her, all I know is that she’s out the same time as me, I see her every time I go for a run, so thats four times a week.

She comes out early, because there are less people around, less people like me for example who might judge her for being over weight. Not that I am judging her, far from it, one of the main reasons I go out 1st thing, as well as the benefits I mentioned earlier, is that theres not many people around, so that means less people to see me wobbly ass or kangaroo pouch bouncing around.

She never smiles or acknowledges me, because she might be thinking ‘here she is, that runner, showing off again, smug cow’. Yes, that’s what I am assuming, because thats what I have thought before, when I have seen people going faster than me, or looking leaner than me, I’ve been there thinking, ‘ahh its alright for you, you don’t really need to be out here running, ya skinny bastard’ I now however realised that the reason they are probably thinner, leaner than me is because they get their sorry purt assess outta bed and do some exercise every morning and I bet they don’t have a kebab on a weekend either? I bet they eat that, Quinoa shit and are vegan! “See I can still be a judgmental biatch”

Anyway, every time I see her, she never smiles, nor makes eye contact, and I wish she would, because I am not judging her, she might not even think I am? But I kind get the feeling she is. This morning though, i’m sure she cracked a small smile, I’m sure of it. There wasn’t any real eye contact, but it was an acknowledgement! ‘what she will never know is, that little smile, made my day today’

I would love to make eye contact so I could smile at her, or wish her good morning. I wish I could be as brave as the young lad this morning, to have the courage to make an effort and ask a complete stranger why they ran!

Now, its 8.21 am, I’m getting picked up at 9.15, so I had better get me sorry ass weshed, and I need it, after wearing same clothes for a week, and yes i’m still sat in me running gear! But quite frankly ‘I don’t give any fucks’ because today, will go well, regardless of what shit work throws at me, all because that lad had the courage to take an interest and because I got a slight smile for the nameless woman AND I got to take in these great views 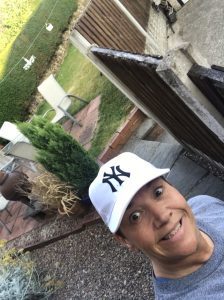 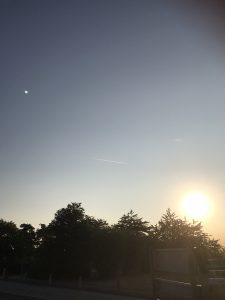