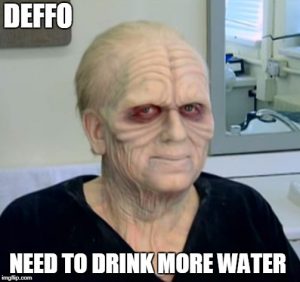 Well after breaking my 35 day alcohol free experiment this Saturday, its fair to say, the consequences were pretty dire Sunday, morning, afternoon AND evening. “How the fuck did i do this EVERY weekend?”

Now don’t get me wrong, i knew that the likely hood of me going for me 6 am run Sunday morning was about as predictable as England winning the world cup. but i did not expect it to feel that bad.

Walking up, wi a gob like gandys flip flop (which to be fair, IS TOTALLY expected) but I swear some sadistic bastard somewhere had got a voodoo doll of me, and wa sticking fucking needles in me head. 4 Ibuprofen and 6 paracetamol later, the headache was still hanging around until i went to bed at 10pm.  I ate every greasy, unhealthy food stuff in reaching distance, I sat and pretended to watch mind numbing TV, i did nothing, and i mean nothing, even if I had wanted to, i wouldn’t have had the energy, i was totally and utterly spent.

This morning run, well it wasn’t even a fucking run! my belly was more swollen than usual, i didn’t have the usual empty Kangaroo pouch bouncing around, it felt like i was carrying fucking twins. My skin still looks dull as fuck, I’m still feeling slightly lethargic,  BUT what i do know is, that this feeling WILL PASS.

On the plus side, i had one of the best days out in a long time, i bumped into people i hadn’t seen for ages, i was in great company, the weather was perfect, not too hot, not too cold, the music and atmosphere was mint, was it worth the dire hangover yesterday? I’d say YES, but, and here is the but…

I learned something from it, for the past few weeks whilst i have been alcohol free, what iv’e gained personally far out weighs the consequences of drinking. Now that’s not me saying “i’m not drinking ever again”, far from it, but i DO HAVE CHOICES. If i have the time the day after drinking to mong out all day and be of absolutely no used to anyone, especially me sen, then so be it. However, if i haven’t got the time or feel like dealing with a raging hangover the following day then i will simply abstain – SIMPLE

I could have sat and mourned the one day out of my life that i lost, which for the record would have only served to depress myself even more OR i could (which i did) take the hangover on the chin, (although there was quite a bit of moaning going on) and accept that it was self inflicted, no one forced me to drink, quite the opposite, i was ready to test me sen and oh, fucking boy did I?

So test outta the way, i am looking forward to getting back to feeling me old send again, back to me morning runs, early morning writing, which my friends is going very well