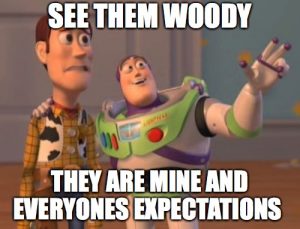 The amount of time we can spend worrying about, ourselves, they way we look,  other people,  what other people think, money, work, relationships, freindships, something that happend in the past you name it the list goes on….

For example, Monday i had the best day, whislt it was really really postive, i had been around some amazing people, but when i got home, i was fucking absolutely drained,  i was running on zero, the tank was empty.  Here’s an excert from my journal (Below) from Tuesday, because i was still thinking and worrying about what happened the fucking day before

I didn’t have so much anxiety as such about the BBC breakfast show, i thought fuck the bus this morning I was feeling more anxious about running late for the show and it was a good decision I was chuffed to find that me fave taxi driver was the one taking me down to the studio. Shit I have forgotten his name already, he was good to talk to him though, he’s down to earth, funny, just what I needed before going on air.

I arrived to the studio early, to calm me nerves only to hear that as well as recovery month being talked about in their news items, so was the fact that Doncaster had launched a new pilot to tackle antisocial behaviour in their city centre, their definition of antisocial behaviour was cleaning the streets of SPICE heads and beggars. They had recruited two full time police officers, who’s role it was to sort this out and rid the streets of the “unweshed” the “zombies” There i was thinking “were already doing this in Sheffield?”

I had done me prep, worked out what messages I wanted to get across about recovery month in the show, before going in, but now I’m thinking ‘what if toby asks about Sheffield, or my thoughts on SPICE,’ considering I was there to talk about the other headline ‘Recovery month’. I decide to take some more notes, some headlines on what we were doing in Sheffield, just incase. Personally I was thinking this was a great opportunity for Sheffield to plug whats already being done in Sheffield to tackle spice and if they ask about begging I can also plug the help us help work.

I get into the booth and tobys sat there, I know already from listening to him that he’s been surprisingly been giving a well balance opinion in his responce  about donny. I settle me sen in me chair and we have a little chat, whilst the weather update was on and so I ask him, “what you planning on asking me then?” He replied “he didn’t know”. so i went for it, i said, “if you want to ask me about SPICE you can because have already been doing loads of work.”

All was going well, they played the interview with Dave and Pat, so it was a great introduction to talk about recovery month, I managed to get me thank you’s in for BBC radio Sheffield and the staff. The notes that I had taken at 1am the previous morning when I couldn’t sleep, just flowed. “addiction isn’t new, its been around for years, but so has support for people who are dependent, all the services are open access, no need for an appointment, just rock up.” Then toby asked about SPICE and I mentioned the SPICE training, empathising with businesses, trying to reassure something was being done, I talked about the SPICE clinic and the fact 4 of our most prolific were using it, I also got in the advice from Help us help. Before I knew it I was done, I was getting a pic for the FB page, saying bye to Amy and off to work.

As I left the building my knees were shaking, my hands were, I was immediately trying to re-record what I had just said in those 5 minutes. FUCK I was suppose to the there plugging recovery month and end up talking more about SPICE and begging!

I got a couple of messages saying well done, but I knew I wouldn’t be happy until I got into the office to play rewind. Well apart from sounding like a fucking seal, begging for its next fish treat “erm, erm, erm, fucking erm, I need to stop saying erm”

The morning was going great, I had nothing taxing planned or urgent to to, I was able to listen into the rest of BBC radio show, from 9-10, is generally when the neanderthals start stirring or waking up and calling in with their cave man statements of “its their own fault” or the twat who called in saying that “drugs should be legalised, then the temptation to want them wont be there anymore and it would tackling on street dealing ” I’m thinking what the actual fuck! “what about alcohol ya pleb? So this will stop back street dealing ”. To be honest the most of the neanderthals must have still been asleep, cos the majority of the calls were pretty sympathetic and understood that this was a complex issue.

After the Paulette show and Kerrys interview, I took me sen into a small room, downloaded a recording app on me phone to record and upload the interviews on FB, after recording Kerrys slot for 20 mins, I found out that I had to fucking upgrade and pay more to share the fucker! It took me another 20 minutes to work out how to do it. Then I get a message of our Pat, saying “Trace im confused the event on facebook says it starts at 12, I thought it was 5?” I’m like “FOR FUCK SAKE” I was straight back onto facebook, but had forgotten how to edit the event, ‘could I find it? could I fuck?’ I can feel me anxiety levels building up, I am trying to #haveawordwimesen but all i end up doing is having a full blown fucking argument wi me sen instead!

“Calm down it will be reet”

“How will it be reet, when 20 odd people have already said they are coming, but they will all turn up at fucking 12?”

Don’t worry the majority of the service users will know what time it is!, calm down ffs”

“What about them that dont, they rock up at 12, but cannot come back at the actual start time?”

Still arguing wi me sen, I am trying to work out how to edit the event page and I get another ping in me inbox from Maria – ‘Tracey what time does this event start?” OMFG the cycle of anxiety ramps up another level, then Richard calls, its 11.30  “i’m at the exhibition and they have said it doesn’t start until 5pm?” Armed with apologise, I explain I got it wrong and was currently trying to rectify me fuck up, I was worried that not just him, but everyone else who had planned to come to the event, wouldn’t be able to come back, then not as many will be there to support the event. I know its not about quantity, but fuck me having an audience at a launch event would be nice. I could hear it now” I did come, it said 12, but when I got there I was told 5”.

The i had a very emotional encounter with a guy, who was very vulnerable and scared – i wont go into that, all i will say is that htis poor guy was one of those “so called zombies” another outcast from fucking society” as i said before i was utterly drained, i couldnt think straight, i was emotionally drained i was spent. But, as you can tell, i did spend some time, took some thinking time out for me sen to reflect on that days events. I mean after all it was still having an effect the fucking day after…..

Expections is a big thing for me, #havingawordwemisen helps me to work out, just just my own expecations but of others around me. But by learning to understand my expectations, whether they are too high, un-achievable, un- realistic, i am learning to be less hard on me sen. 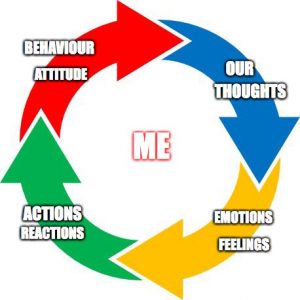 Learning to manage our own thoughts can be hard, because alot of us have lost the ability to actually think for ourselves. life becomes so much easier if some one tells us what to do.

How much time do you spend worrying?  Because i dont know about you, but i can worry about fucking everything. Then worry, is closley followed by fear, fear is always hiding behind our worrying

learning to manage your own feelings and emotions can also be hard, because we have learned to suppress alot of them. Its normally ok to express happy ones, if they are not so happy they can make us feel uncomfortable and can be unconfortable for those around us too “and we dont want that do we !” That was sarcasm by the way…

Learning to understand how our thoughts and feelings affect our actions / re-actions – how we react to certain situations, or more often than not over react

Then ultimatly learning how all of the above combine and shape our our behaviours and attitudes, our approach to people, to work, to freindships, relationships.

I have been writing now consistently for just over three months and during that time, despite all the ups and downs, if have never been happier in myself, the book, that started this all off, is slowly coming on, which is good, my writing is coming on I’ve never been as content – life is good and do you know why?

Because i have started to spend more time focusing on ME my attitude is changing, i am starting to learn i cannot always rescue everyone, change them or make them feel better about themselves, i cannot change peoples attitudes or behaviours, BUT i can my own.

So im signing off with one  question for you

“What are you doing for YOU today?”

2 thoughts on “letting go of yesterday”