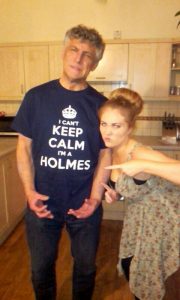 Four years ago a long time friend who i also class as my soul mate was diagnosed with an inoperable tumour on his Liver.

I will remember the moment that Mick called me, for the rest of my days, Its was St Patricks day, i was in the pop up tent at the top of Fargate, Mick had been to see the consultants that day for an update on his progress, or lack off, Mick had gone along to that appointment hoping to find out “how long he had left”

He had been on my mind all that day, fingers platted waiting for him to call, I had to wait, to stalk him for the outcome would have been more about me, than him! I mean FUCK me his was him who was courting with death, not me!

I honestly wasnt expecting him to call that day, after all deep down i think we were all expecting bad news, so when my phone buzzed and micks name was there, i rushed outside of the tent and braced myself for the news.

At first i couldnt work out what Mick was saying, the guy was fucking inconsolable, crying like i have never heard anyone cry before. It took a few minutes for him to be able to compose himself and break the news, i braced myself for the worst, but he simply said “Its gone?”

I was like “what the fucking hell do you mean its gone?”

Mick “Its gone, the tumour has gone”

I mean it was fucking amazing news, the best outcome ever? but how the fuck does someone get told, “you haven’t got long to live, theres nothing we can do” to “its gone, the tumour has gone”

Trust me  i could write angrily for quiet some time about the outrage, anger i felt towards the Dr’s, imagining how the fuck the past few months had impacted not just on Micks life, but his families. But quite frankly thats not worth my energy or time, and also that would be about me. But one thing i learned from that whole experience is that “None of us know what lies in store for us”

That day reminded me that freindships are the most precious things we can have, its not about quantity its the quality of our friendships that matter most.

Just recently, Mick has had to undergo some more test, as i appears that something has returned, no one knows the outcome, but depsite living the past four years facing, living with the reality that … I cannot even say it

This guy, never ceases to amaze me, we/I now make that effort, time to call him, we can go from being serious to fucking taking the piss out of anything and everything in a nano second. I feel more alive around Mick, sharing my own fears, thoughts than i do around anyone else. Inspired by my blog, Mick has started his own and despite sometimes debilitating self doubt, he too is learning to listen to himself, put his needs and wants first, and lets face it, he aint got nothing fucking else to lose has he?

I read Micks latest blog / post yesterday and it made me smile, laugh out loud, so with his permission i would like to introduce to my good friend Mick Holmes, before i go, i just wanted to say again, (cos i know he will be reading this, once he gets his sorry ass outta bed) – I love thee mate, see ya in a couple of weeks xx

When 4yrs ago the Dr’s told me I’d got an inoperable Tumour on my Liver and had only got months to live. After the initial shock had subsided, I kept believing that I would prove them wrong  short answer to the outcome is that the Tumour mysteriously disappeared (I’ll explain more on that in another post ) but when I first was told I was “on my way out” so to speak, to keep myself focussed and in a healthy frame of mind I set myself lots of difficult challenges

4 thoughts on “I believe in Miracles – Do you?”