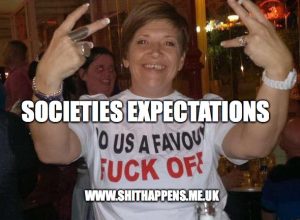 Its the annual recovery Bike ride, which means today wont feel like work, because I have the honour of being around, so many other people who themselves are practising #havingawordwitheirsens I love being around people who are learning to find out who they are, who take a risk everyday to be someone different, someone who is practicing not to be self destructive, practising being more constructive, Learning to live instead of give, being opposed to doing.

It is also my youngest daugters Birthday, she’ll be on route now from Scotland to her new home town of Manchester, then celebrating with friends, before trotting off to Ireland at the end of the week. So happy Birthday Lauren, your card and surprise pressie is on route too…

My first thoughts upon waking this morning was… WARNING “get ready cos this is how my brain can operate in a morning….”

I caught up wi me buddy Kate Mitchell “who is actually a best selling author, erm I might add”. Fuck me who would have thought when I was growing up I would be friends with not just one but two published writers? Ooo Ooo and I know that Lucy Rocca, best selling author of the A-Z of binning the booze, but lets be honest, I have only met her once.  Oh and I know Kathryn Littelwood, Author of cultivating “Mad Cow”, but again i have only met her once, and spoken over the phone about DWP the impending Universal credit system coming into place soon.  I’m turning into a reet name dropper and flash git ain’t i? Anyway I digress…

Me and Kate were catching up after not speaking, well apart from the occasional messages and facebook post, for over a year.

The mad cow was called me whilst making apple jelly, not none of that package Jelly shit, homemade (apparently she doesn’t like waste) she wa making it from the apples from her garden. She wa busy stirring, multitasking, pouring bleeding vats of the stuff onto jars whilst chatting to me on the  phone.

It was nice to have a catch up and share some of my journey so far. I remember a while ago after a couple of blogs I had written her asking me “when are you finding time to write the book?” . I remember telling her a white lie at the time, saying “yeh its coming on great, I’ve taken your advice,  I make time to write every morning, I’ve included me in the story,  have sorted the structure and rather than pick off from where I left off before, I have started from scratch and my writing and approach to writing certainly felt different, more honest”

Now don’t get me wrong, none of is actually a lie, its all true but not all of it, what I failed to mention was that whilst I am writing every day, “Tapping away practicing me morse code” well, thats what our old man says it sounds like from me room every time he wakes up in the morning, He’ll even tap rapidly on my door walking past saying “morning weirdo” . But what I really failed to share with Kate at that time was that I actually spend more time, first thing in the morning, writing in my personal journal, which currently stands at 31,314 words. This though is my very very private writing, its the place where I off load, all the weird shit that goes on in me head “and trust me you dont wanna be reading any of that!?. But then somehow a blog comes out of it, hence this one this morning

So yes I am writing thats the truth, but what once was a desire to write about my dad and his journey with alcoholism, has actually turned more into a therapy session for me sen #havingawordwimesen. I am still writing the book, but I find it far more easier to put aside a good whole afternoon or day even to be really able to focus on that part of my life, that part that included dad, rather than dedicating time every day.

And whilst we were talking and I was being totally honest about the time I actually spend writing, dedicating time to the book, I realised “thats ok!” I was even more reassured when Kate shared that she can be a reet lazy git, and will often go days with out writing, then spend four days cooped up in her room writing like a woman possessed.

Shared how she loved my blogs, “even though my grammar left a little to be desired!” Laughing to with her, I shared how at one point, my shit grammar was one of the main reasons I never ever seemed to make any progress on writing, I mean I procrastinated for years, worrying about, spelling, grammar, what people would think? Would people read my stuff and say “nah it didn’t happen like that” . But guess what, I think I can safely say that over the past four months, since I set off to Ikea, bought me desk, converted my bedroom into a makeshift office, I basically I am learning NOT to give a SHIT what anyone thinks!

And guess what? Thats been the most liberating part of my journey so far, I can share my thoughts, opinions, hopes, fears, aspirations, stories of people who inspire me – Well not all of it, “I’m telling a white lie AGAIN because you’d be having me sectioned if you read some of that morse code shit that comes out of this keyboard of a morning”. But it is soooooo nice to not give a flying FUCK what anyone thinks! Positive feedback is a bonus, its humbling, its nice,  and if no one likes what I write then thats a bonus too, because they can make a choice not to read it, “I ain’t forcing it down anyones throat!”

If you like it, READ it If you DONT, then DONT