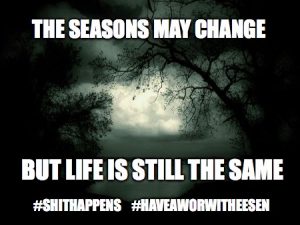 I’m not going to lie, these dark nights and dark mornings have been fucking with my mojo of late. Waking to sunlight,  put a spring in my step, but during the winter, it can be like someone has nicked the step and I wake up feeling like I have fell flat on my face.

I long for Spring, summer to come back around again, that natural sunlight that helps make you feel alive and want to jump outta bed in a morning and go for a run in the peace and quiet. BUT, its winter now, the dark early mornings are not going anywhere soon, the thought of running in the dark is not appealing, it also doesn’t feel that safe either, so I can either carry on moaning about it or shut the fuck up moaning and deal with it.

I find great solace in writing, I cannot believe it has taken me nearly 48 years to realize it, It’s meditative and brings me a joy. My inability of late to get up early has impacted on the quality time I make for myself, which is and has been vital of late for my self-esteem.

So to counteract the dark mornings I purchased one of those’Wake up light’s’ they start to glow slowly half an hour before you wake, mimicking the sunrise. Now I’m not convinced it’s going to work yet? yes, it is nice to wake up to a nice soft light in your room opposed to the pitch black, I have even got birds tweeting for the alarm, though I am still having to set the phone alarm ‘just in case’. The birds are not real, they sound tinny, empty, shallow, FAKE, but its better than being woken half to bleeding death, in the pitch black.

And when I left my room and went downstairs to make a coffee, the reality was it was still pitch black, it still feels like I should be crawling back into bed until the real sunrise starts making an appearance. last night I had all good intentions of putting the washing out this morning, but I chose to put it in the dryer, why? mainly because what fruitcake puts washing out on a line in the pitch black? AND I would be hard pressed finding the bleeding washing line!

There are some people who equate bad days as being some sort of failure. Or who measure their happiness based on feelings, which is ok, but you have to recognize unless you live in a bubble, the likely hood IS that some days aren’t going to be as good as others, some are going to be darker than others.

That’s fucking life, #shithappens life ain’t a bed of fucking roses, in fact, I’d prefer not sleeping in a bed of roses, I’d be too worried about the pricks! Seasons come and go, light always follows dark, its life!

I spoke to me mate Shauna, who messaged me after yesterdays blog and she shared a quote she had seen on an expat website, it read “the grass may seem greener on the other side but before you take that leap, make sure you can water it”. I don’t know who wrote it, but it is bleeding genius! She lives mostly all year in the sun, but that doesn’t mean she’s happy 100% of the time. (sorry Shauna)

I am trying to work on the principle that worrying or moaning too much about what’s not going right only causes more stress.  YES, I could think, daydream about the summer mornings, sit morning memories of summer,  but it doesn’t matter what day of the year it is #shitstillhappens you still gotta take ya self out of the equation step back #Haveawordwitheesen and see things for what they really are and let the shit go, release it, it ain’t helping by holding onto it?

I sometimes feel uncomfortable telling people I’m not ok, so when I share, bare myself on here, trust me when I say that when I press that send button, sometimes I can get anxious. It is always there in the back of my mind, that someone will be wondering, “is she ok?” Or “what is she NOT saying? ” or read too much into the post, or search for unwritten words behind them. I’m just letting you in on one of me #havingawordwimesen sessions.

I am simply just saying how it is for me! There are no hidden meanings, I’m just saying what I think, because I can, because I want to, because I think that honesty is always the BEST policy, I always have. Though I realize it’s not that easy in practice I get that! But I am also working on it, being honest with myself, is hard, but it is also very rewarding. So I am just practicing on getting it out there, off my chest, that’s all.

Today, for example, I know already that I have a lot of work to get through, I have got to have a conversation with someone who I quite frankly think is a DICKHEAD, with a capital D, but guess what? “that’s what I am paid to do”it’s my job and that said DICKHEAD is just that, its not like I’m being asked to sleep with him, I am just being asked to work with him, alongside him.

Whilst I come across the most amazing people on a day to day basis, I still have to deal with Fuckwits, Dickheads, people who don’t care as much as I do, people with no passion for the job, just the wage and GUESS what that’s ok, that’s what we call life!

The season may change,  but life is still the same

Alas, it’s light, I’d better get my sorry ass into work and prepare myself for dealing with the DICKHEAD