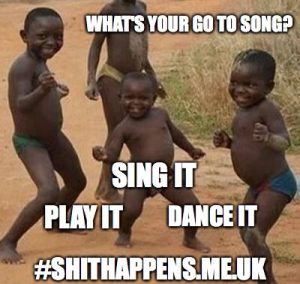 I’m sharing this today as a reminder that even if life is shit there ARE some things that can help ease the pain, find out what yours is and do more of it, for me it can be as simple as a song.

Every morning, during me #havingawordwimesen sessions, as well as thinking through challenges,  I always make time to reflect on what’s going well, remind myself about the things that I have a lot to be thankful for.

The other week our old man came home to say he had booked tickets to go and Gladys Knight and the Pips next year, his treat. Now don’t get me wrong I’m up for anything especially if its free, I have heard of Gladys of course, I’ve heard some of her songs, but I’m no expert, so I searched on Spotify downloaded some of her songs, cos there’s nowt worse seeing someone in a concert miming to the songs and its better if you can sing along right?

I was sat here at my computer and The best thing that ever happened to me came on and WOW! that song stirred something in me, the lyrics really spoke to me. I listen to the song every morning and it never tires, the song refers to one person, but when I listen to the song I think of everyone who is in my life and who have helped make me who I am today, some for just being who they are, inspires me and they don’t even know it.

So have definitely decided that this is going to be one of my funeral songs, “YES I said it” the one in the middle of the service, the one where everyone has two minutes to take time to reflect on memories past, but I want to be able (in my absence) to say thank you to every single person who could be arsed to come along to send me off

Years ago, alone with two kids, fuck all money, in an unfurnished maisonette, recently released from Middlewood, there was a song that I played daily, in  fact I would play the song every time I felt shit the song was ‘Search for the Hero inside yourself’ by M People, the lyrics would change me frown upside down as soon as I put it on, that song saw me through some dark times i’ll tell thee

Sometimes the river flows but nothing breathes.
A train arrives but never leaves.
It’s a shame.
Oh life – like love that walks out of the door,
Of being rich or being poor.
Such a shame.
But it’s then, then that faith arrives
To make you feel at least alive.
And that’s why you should keep on aiming high,
Just seek yourself and you will shine.
You’ve got to go to search for the hero inside yourself,
Search for the secrets you hide.
Search for the hero inside yourself
Until you find the key to your life.
In this life, long and hard though it may seem,
Live it as you’d live a dream.
Aim so high.
Just keep the flame of truth burning bright.
The missing treasure you must find
because you and only you alone
can build a bridge across the stream.
Weave your spell in life’s rich tapestry –
Your passport to a feel supreme.

and on that note folks, its Friday what ever you are doing or have planned, make the bloody most of it, make the most of doing something for you, regardless how small.