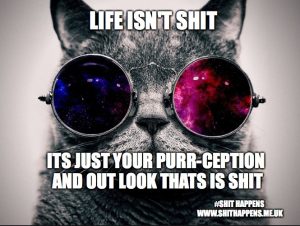 After a week of highs and lows, more highs to be fair the best parts have been being surrounded by some good friends, amazing work colleagues and a little bit of recognition and laughter sprinkled on top and all of this was absolutely FREE, didn’t cost a bleeding thing apart from a little mindfulness and gratitude.

I am dedicating this weekend to working on the book, I have also got plans to go out for a walk in the woods with a couple of good friends, coffee and catch up then spending some quality time with my little sis. – But I thought I would share a couple of snippets of the book with you, seeing as many of you have been asking how it’s going, so here goes …

Dad had many women, in fact, he had a fucking harem of em. The first part is about when I met his first bit of fluff and the second part was years later when i found myself pregant for the second time.

At some point whilst living on Fraser dad moved out, I didn’t recall there being much drama around him leaving, it just seems like one minute he was there and then he wasn’t. But what I do remember, is the house feeling a lot more peaceful, we didn’t have much, by way of money, but we were happy I know that. It felt like we saw more of dad after he left, well I wouldn’t say more, just that we actually spent some quality father and daughter time with him, but then I say more, there are only a couple of times I remember.

There was the one time when dad took us swimming to Heeley baths, he came out of the changing rooms wearing his swimming trunks, strutting around the pool, before diving straight in. I didn’t even realise dad could even swim! I was even more impressed that he could swim underwater for a whole width of the pool. I don’t recall us going for a hot chocolate for a treat after our swim like the other families were doing. We were picked up, took for a swim then taken back home.

The other time dad came to take us out, he’d planned to take us to a fairground, I do remember feeling excited on route to the fair, now this was more like it? I don’t remember going on any of the rides, I don’t recall, us doing hook a duck or eating candy floss!. But I do remember thinking pretty early on that this wasn’t an ordinary trip. And that was because it wasn’t!

Remember dads ‘other woman’ the one I mentioned earlier?. The one my cousin Paul pointed out to me? Well, that day we finally got to meet her face to face.

So what was meant to be a family trip to the fair was actually a rendezvous  to meet the ‘mystery lady’ dads ‘new bird.’  I remember arriving at the entrance of the fun fair. Uncle John, dads oldest brother were stood there already. I didn’t know he was even coming? I also didn’t know he’d be there holding hands with a woman I had never seen before neither! She certainly wasn’t his wife auntie June? and she wasn’t as pretty as auntie June neither, the only thing I remember about her, was her breath, as she leaned down, bringing her head level to mine, to say hello, she smiled exposing her stained teeth exhaling the worst breath have ever smelled, I quite frankly it smelled like shit. I remember having to pull back before I projectile vomited in her face.  I wondered if this is normal to be having another woman? other than ya wife at home in them days? Did all dads have other women too? dad was at it, now uncle John?  I was confused, what am I suppose to say next time I see auntie June? would she know already? Do I tell? Who do I tell? What would I say?

Turns out I didn’t have to say anything Auntie June and Uncle John had officially split and now he was with this other lady, whose name was Dot, in fact, she and uncle John are still together to this day.

Recomposing myself I saw ‘her’ that other women, the one from the house our Paul had taken me to. Her name was Pat, short for Patricia. Comparing her, she was nothing like mom, in fact, she was quite the opposite. She seemed more glamorous, well more makeup, (mom didn’t need it) she was blonde, whilst mom was a brunette, her hair was short, whilst moms was long. Now don’t get me wrong, she was pleasant enough, I didn’t kick any money out of her hands as I had threatened before, she wasn’t overbearing, in fact as I recall she spent most of the trip spending time with dad opposed to getting to know us.

Little did she know then that a few years later I would be stabbing her precious little boy with a dart for bragging about my dad, “my fucking dad” taking him and his brother away on holiday, even worse he was taking them to Spain, abroad somewhere that only a few of my friends family were able to afford at that time.

So what was supposed to be a father and daughter outing turns out, me and our Sarah were just the fucking gooseberries!

I’m writing this now, thinking about the child that never was, he/she would have been 27 now, saying a prayer and asking for forgiveness that I will never know if I will ever get. This is going to sound harsh, insensitive, but I didn’t give the abortion a second thought, I didn’t see the unborn child as a child, I was a month gone, it was the size of a peanut, it wouldn’t know anything. But years later, in middle wood hospital, alone and broken, I cried tears, rivers for that baby, the baby I never had, the sacrifice I made, murdering a child that I would have loved with all my heart, but wouldn’t have been physically able to, all because of him. It hit me like a tonne of bricks, I never saw the grief coming, it came from nowhere.

I wasn’t having a baby and that was it, my mind was made up. It was the first time “I took control and said NO” no to him and to dad.

Telling dad was going to be tough because, dad thought he was going to be a grandad again, by this time, dad had sold the video shop, he still had the taxi firm, but he had started managing a pub, just down the road from the taxi firm. I was hoping to confide in him and get some support, I’d told his girlfriend who was understanding and she reassured me that dad would understand too. Dad was in the bar drinking with his mates, I asked him if I could have a quiet word, “whats tha want some money?” He laughed with his mates as he gestured me to the room behind the bar. Taking a deep breath, I tried to explain that I wanted an abortion and why, I wasn’t happy, I was sick of working, I wasn’t a proper mom already, Mark was never going to work, it wasn’t going to work. Dad stood there, he already knew he was a lazy bastard, but he wasn’t a bad bloke was he? He didn’t go out drinking, he stayed at home looking after the kid, he didn’t beat me, he cooked meals, he was all the things dad wasn’t, so in his eyes he didn’t see what the problem was!

In fact, he wasn’t impressed at all, he was outraged he told me I was being selfish, it was his grandchild too!! Fuck me he had the audacity to bring himself into it when he didn’t even spend any time with his current grandkid! He told me he would never speak to me if I had an abortion and with that, walked straight past me, back into the bar and sat with his mates. I stood there, trying to compose myself, his girlfriend came through and reassured me to ignore my dad, he would come around. I had never ever asked dad for anything in my life, I thought that because I had been working for him for all those years, he saw me more than his shop assistant, I thought he might have gotten to know who I was, but he didn’t know, or care about me at all. That was confirmed when I walked from behind the bar, hoping his mates wouldn’t see the red around my eyes when he told them what I had wanted to talk to him about. I couldn’t believe my ears “Ah she’s alright, she’s pregnant and only wants a fucking abortion” all eyes on me, no one laughed though, they didn’t say anything and all I can remember is I couldn’t get out of that pub fast enough.

The moral of every story is #shithappens, but you have a choice on how it defines you and on that note #thinkforyourself #gratitude