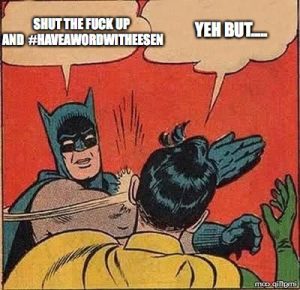 I weighed on at 13.07 on Friday and weighed in at 14.01 this morning – HOW the FUCK did that happen? that’s a full-on Half a fucking stone in one weekend? I was still feeling rough after an overindulgent weekend, I haven’t spent hardly any time on me, I’ve got shit loads of work to do, blah, blah, blah

So here I was this morning, psyche myself up for a day of head down working on a BBN application that has to be in this Friday, I’d called into Macci dee’s for a black coffee hoping it would provide enough stimulation before heading to touch down and place where I would not be distracted.

On the way out I bumped into a woman I have known for a while, but haven’t seen for a few months. I met xxxx over 18 months ago, at the time she had just completed an alcohol detox, on the face of it, she looks a fucking tough old bird, she didn’t take any shit from anyone, she was never afraid to speak her mind, she was suspicious of people she didn’t know, but after a while of bumping into her and looking past the tough exterior, she reminded me of someone I once knew.

She was me many years ago when I was lost, not sure what or where I was going, like me, she had a sheer determination that she wasn’t going back to the booze, I never really knew her past story, to be fair that wasn’t relevant because all I saw was a strong and determined lady.

She has been doing bleeding amazing over the past year, she started working, volunteering, doing courses at Northern College, still rough as a bears arse, and she beat me hands down when it came to swearing, but you could see her self-confidence was building, it was a pleasure to watch her grow.  But over the past few months, she has been blighted by some physical ailments, bad back, bronchiolitis, but this hasn’t stopped her getting up at the crack of dawn for work every day.

She had been into work this morning and was on her way home, and she looked terrible, half the women she was six months ago, today she was the most vulnerable I had ever seen her. she explained how she had been having uncontrollable thoughts, telling her to self-harm, her anger was at reaching to a point that scared her,  she couldn’t relax, she couldn’t sleep, but worst of all she didn’t know where it had all come from. Well she did, when she talked some more, she shared parts of her past I never knew existed, why would I, I never knew her that well, I had only gotten to know her after the booze. She explained that she had recently been to a funeral and she thinks that this has triggered off memories of losing her child at birth 7 years ago. She shared the agonizing memories of being left to deal with the fact that out of all the moms on the ward she would be the only mom leaving without a child, she had been re-living the experience as if it had only happened yesterday, she recalled how that was one of the main reasons she turned to drink.

My heart broke for her, I suspected she had, had it bad but I cannot simply even begin or want to even imagine what xxxx is going through, all I do know is that despite being tempted, she flatly refuses to turn to drink again. We stood and chatted for a good 20 mins before she had to leave to get home to make an appointment with her new mental health worker. I admired this lady before, but she will never know just how much she inspired me today but most importantly she made me look at me sen.

There I had been complaining about a fucking couple of measly pounds, a deadline to meet, feeling sorry for me sen and that poor cow was walking in a living hell. It was a sobering encounter and as soon as I walked away, I made a pact with me sen to shut up fucking moaning and be thankful for having my sanity today.