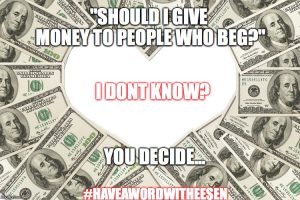 Well, today is the final day of being stood outdoors manning the Help us Help Cabin and its been a week of highs and lows. I still maintain that I will not give money on the streets to people who ask or beg. The reason I won’t is that I do not think that giving money can replace what I think most people need and that’s a feeling or sense of being connected to other people.

I have spoken, seen and witnessed a lot this past week, so apologies in advance but I will be writing, ranting and offloading about the whole experience, what I have seen, witnessed and my thoughts probably for the next few blogs

The million dollar question throughout the week has been “Should I give to people who Beg?” There it is again, whatever happened to people thinking for themselves!

Don’t get me wrong I try my best to be as understanding as I can, if I didn’t I wouldn’t be freezing me knackers off in friggin winter talking to strangers having conversations. Sometimes though it does feel like, it would be easier trying to explain Abert Einstein’s theory of relativity or quantum physics than trying to explain why some individuals/humans find themselves on the streets asking for money from complete strangers and its not just me but well-experienced workers in the field, some of whom were once on the streets cannot explain. Its certainly going to take more than a 10-minute conversation from a cabin, but at least its a start.

I could describe Sheffield streets as a circus, stood in that cabin I have come across the usual clowns, I’ve come across the guys who can get the laughs, the guys playing cat and mouse with the authorities, I’ve seen the trapeze artist who’s daring stunts leave you holding your breath, these are the same guys who I have seen shamelessly approach unsuspected members of the public asking/demanding money to the illusionists who sit there  on the floor with their notepads claiming to be raising funds for a room for the night. Then you have the vendors who walk the crowd who are not there to entertain, but to sell you an ice-cream cone or a drink during the break, in Sheffield’s circus these would be described as our Big Issue Sellers or vendors.

Do you remember the days when you would see the guys selling the Sheffield Star on the street corners, with their mobile paper stands, shouting “Morning Star” to attract passers-by who would have their money ready to make that faster than light money transaction, take the folded paper then be on their way to where ever they were going? You don’t see them anymore, in fact, I think there is still a guy who occasionally sells the star at the bottom of the Moor, but gone are the days when they would be practically dotted all over the city center. Back in the day, they would be out first thing with the morning edition, sell the lot then be back out on the streets in the afternoon selling the updated evening version. You would always be guaranteed to get a give smile, thank you, or see a couple of other people stood with the news seller chewing the fat about god knows what!

Our Big Issue sellers have replaced the old school weather-worn, guys who would be out on the streets, come rain or shine selling the local rag.  I will happily give a Big Issue seller a couple of quid without purchasing a paper, because I know

b) They can sell the paper to someone who does have time,

c) I’d rather chat and have a conversation, say hi, have they been busy? (ya know the same kind of question you would ask a taxi driver, who you have never met before, just to make small talk and the journey a little more pleasant)

d) I’ll happily chuck em a couple of quid just in case they don’t sell all their papers I mean the poor fuckers are out there come rain or shine selling newspapers to earn an honest living, well as honest as it gets.

And to those who say “yeh but they are still spending their earnings on drugs!” I’d say, “so fucking what? I don’t have to tell you what I spend my money on because I have earned it”. They are no different to all the big shots or your average Joe who thinks it’s acceptable to be shoving copious amounts of coke up their nose every weekend, because it’s cool or because they can afford it!

I can absolutely guarantee that every single one of those guys stood there who has invested £1.25 per paper to sell for £2.50 has more resilience than every ten or hundred of all those people who walk by pretending not to see them. They are some of the bravest guys I know, they stand and take the punches of rejection on a daily basis, they put themselves out there, exposed to the elements and looks from thousands of strangers walking past, dealing with looks that I can only guess can feel icier that a northerly wind.

The guys who sell the Big Issue’s in our towns and city centers are just like you and me the only difference is they make their living on the streets and there personal circumstances may be slightly different to ours,  they may be either homeless, vulnerably housed or just in need of earning an income.

If you have never bought a Big issue, or haven’t for a while, do ya sen and them a favor, stop have a chat, drop em a quid or buy one of their papers, or even give em a hug! you will never know just how much that will mean to them.

So when someone asks me “should I give to people who beg?” My response will always be, “you decide?” but before making your decision, please do your research, check to see if there is already support out there ask yourself “will this change, change this person’s life?” If the answer is NO then to ask yourself “How else could I help this person?”.

Right rant over, I’m off to the dentist to sort this fucking tooth out, then back to the stall for one last day, but still left with plenty more to think about, rant about for a few more blogs I suspect

But whatever you are doing or have planned for today look after ya sen, Love Fordy x