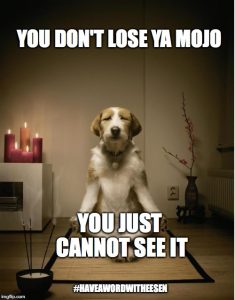 “lost me mojo”, it’s a common phrase, but what does it actually mean. Yes this is what I was reflecting on this morning, playing over me noggin whilst being bathed in the fake sunrise from the bedside alarm clock. “What the fuck does losing ya Mojo mean?” I looked it up according to the Oxford Dictionary it’s A magic charm, talisman, or spell. And according to the Cambridge Dictionary, it’s a quality that attracts people to you and makes you successful and full of energy.

And according to Wikipedia Mojo is something commonly served with fresh bread rolls at the beginning of a meal. “Well, I’ll have a starter at every fucking meal then if that’s the case!”

Firstly I haven’t been physically well, oozing snot/water that could have refilled the Lady Bower Reservoir perhaps might have prevented the mindless fuck’s vandalizing the of Derwent village, “Nice work now ‘Cheryl’ and ‘Steve’ have scratched their names in one of the rocks, I hope you are proud of ya sens ya sad fuckwits!”

Work – you know I love my work, and it goes through cycles, September (recovery Month) October (planning Help us Help) November organising the Help us Help stall then finally December its the Grand finale of coating the BBN assessments, scoring, organizing the Judging event, which once over will give me some breathing/thinking time before the 10 year BBN anniversary awards in February – YES I am working on work for 2019 already.

Time – as I have mentioned previously this is something we have no power over, we just have to make the most of what we have got at the given time, having said that, being busy with work has meant I have been kinda feeling like I have lost a little of me Mojo. Well, I say lost, it’s not been lost, I have still made sure that I spend some quality time wi me sen every morning, just not as much as I’d like.

Injustice and Loss -dealing with the emotions of losing a dear mate, the tragic loss of life and loss for the parents and loved ones close to him. Dealing with the public /social media narrative that “No one is helping anyone anymore” they say scream sat behind their fucking keyboard!

Guilt – of not spending more time with loved ones because my life has been consumed with other external factors, christ I haven’t spoken to me Bessies of late through our closed facebook group! or not seeing or spending enough time with the family.

And that’s ok, because I was and am acutely aware that the previous and next couple of months were always going to be busy, the difference between this year and previous years is that instead of running around like a demented, victim filled moron/fuckwit, complaining and moaning about the overwhelming pressures of work – I have been a lot calmer, a lot more rational,  now I’m not saying I haven’t been stressed or overwhelmed,  the negative narrative chattering in me noggin has still been running at 100 miles per hour, but I have, I have to say felt like I have coped a lot better than previous years. I used to be plagued by a physical feeling that would come on when stressed, wait for it… “my teeth would actually start tingling” yes you heard right, there were times it felt that they were falling out. I was talking to Helen me mate at work the other day, “I cannot remember the last time I had that feeling?” Well apart from losing half of me tooth after eating a curly whirly last Saturday – but hopefully the dentist can sort that one out tomorrow! “I’m having a teeth tingling moment” used to be a standing joke in the office! But honestly, I haven’t felt that for a while, which is an indication to me that I am in a better place. Call it mindfulness, offloading me shit on here, making time for me sen, having a word wi me sen, being reflective whatever you want to call it. This morning is the first time in a week or so I have felt I have found a little of me mojo but I don’t believe that my mojo has got nothing to do with magic or is an innate talisman, my mojo has always been there, ‘Its me’ but for a number of reasons, factors as described above, I haven’t been able to see it or feel it of late.

So in summing up (cos this bird has got some work to do), I believe no-one actually loses their mojo, its just sometimes life/emotions get in the way and hides itself from ourselves, we just need to remind ourselves that we always have some mojo, you can find your mojo, but you can see/feel your mojo more clearly by nurturing and watering it occasionally.