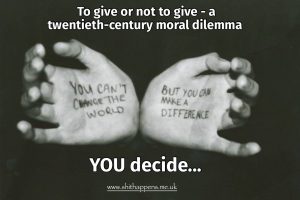 Unless you shop in an indoor shopping center or physically blind it is near impossible to go about your daily business without seeing evidence of deprivation, the vulnerability that exists in today’s society. Individuals sat passively begging, sat with a cup in front of them, wrapped in a sleeping bag, small groups gathering up to no good, people openly under the influence no longer concerned about trying to disguise their drug use. SPICE also is known as the poor man’s drug is available on most street corners for as little as a quid a spliff.

Seeing people beg who appear vulnerable makes us question and test our moral obligation to help that person in need and with more people sat or approaching people for money and with so much advice about what the right thing to do It has become even harder to decide which side of the fence you are going to sit on?

Recently after looking at my monthly bank statement online. There were rows and rows of charges to Greggs, I totted it up and I had spent shy of £60 in Greggs in the previous month and the only thing I ever buy for myself is a black tea. So I made a pact with myself, I wasn’t going to buy any more food or drinks for a month. (particularly when I also know that Greggs daily donate leftover food to all the local charities) I continued to buy a weekly copy of The Big Issue, I continued to sit and have a chat with the folks on the street and when I explained to one of the guys about my self-imposed pact, he agreed with me, “I mean where do you draw the line?” he said? just before I left him another member of the public came around the corner with his usual bacon and tom dip and a coffee from the local cafe.

I work in the city center, I simply cannot afford to give to everyone who asks? I get angry at the thought of an unsuspecting shopper who has just come from the local food bank to feed her family or the guy who is barely surviving on his pension, who would love to help but are barely making ends meet themselves. Most will willingly accept your offer of food or a drink, whilst others will refuse preferring cash instead.

What we are seeing is an increase of people hustling hiding behind the guise of being homeless, however, their actions serve only take advantage of the already disadvantaged and socially excluded using that other person’s homeless status to extort change from well-meaning members of the public. These are often the very same ones who will have access to a roof over their heads, access to benefits, their actions only serve to contribute to blurring the lines.

The hustle has been going on for generations but it was mainly behind the scenes and hidden in close-knit communities, in local pubs, and between trusted neighbours, however, over the years, the hustle has started to flood into more public spaces. Once reserved for street homeless begging has become the new street hustle, this is evident in with the increase in people begging. There is no denying that homelessness is on the rise, but you cannot compare this figure based on people begging in the street. We live in a compassionate society it is human nature to want to help another human being in need, but how do you tell who is desperate and in most need – put quite simply you don’t.

My friend recently shared her experience going home on the bus

“Three of Sheffield’s finest homeless sharing my bus ride home, counting out the days’ earnings. Interesting conversation about the general public taking the piss and they’ve earned £89 each. 2 pizzas for £10 and their suppers sorted.”

The majority that I know are people who are dealing with addiction and/or mental health problems are often connected with having had traumatizing upbringings that make them unable to face being alone with themselves without intoxication and whilst intoxication helps in the short term it is not sustainable in the longer term without causing irreversible emotional and physical damage.

All people begging have a story to tell and how your cash donation will help towards supporting them, if you ask about the support they need they will tell you that there isn’t anything available, even though they may have been visited by outreach teams, PCSO’s or ambassadors before you arrived.

The reality is that there are services who are out on the streets trying to befriend and offer support and lure people off the streets on a daily basis, because they all know that sitting or living outdoors in all weathers is not going to help or improve or help support their physical or mental wellbeing, or who know that begging mainly serves to fund their already unhealthy addictive and potentially deathly habits.

There is an array or groups/agencies who go out onto the street to provide interim resources such as sleeping bags, hats gloves warm food/refreshments, dress open wounds or tend to pets veterinary needs because their owners are either not ready, able or willing to accept the support on offer.

Some may argue that the support that is on offer isn’t adequate or agencies aren’t doing enough and I might agree to a certain degree, but I would also argue that all the groups and agencies are doing the very best with what they have got but at least they are focusing and prioritising their efforts on the ones they know are in desperate need. Which is why public support for these local charities is needed more than ever.

Whilst the signs of poverty are visible, what isn’t as visible are untold stories about how someone who has successfully transitioned from the streets with the right support from local services, that’s where awareness campaigns such as Help us Help help, sharing #Storiesfromthestreet trying to demonstrate that at the right time, with the right support people can live a life off the streets, stories such as Stuart who took part on the first Help us Help film Since being involved in the filming, Stuart has now stopped selling the Big Issue and is focusing on his own Recovery and was one of the Key volunteers who help to shape this years Recovery Months activities.

The Big Issue magazine was launched in 1991 in response to the growing number of rough sleepers on the streets of London, by offering people the opportunity to earn a legitimate income through selling a magazine to the public, this worked well for years but did you know that The Big Issue sales are on the decline?

Vendors on your local high street are not earning an hourly wage while they’re standing out there in all weathers. operating on a self-employed basis meaning they have outgoings and have to turn a profit just like any other enterprise out there.

Vendors buy their magazines from The Big Issue for £1.25 each and sell them to their customers for £2.50 a time. So it is heartbreaking to hear from a big issue seller that they sold 2 mags during the day, making a £2.50 profit only to see someone yards away, wrapped up in a sleeping bag being given fivers or twenties even.

The style of begging is changing, people are getting bolder and will now approach people walking in the streets for spare change “is it right or acceptable to approach and intimidate unsuspecting members of the public for spare change?” The increase of hustlers on the streets is only making it worse for the minority of those who are legitimately vulnerable.

The act of giving money to people on the streets only serves to reinforce the rationale and justification for those who are hustling that it is ok to beg. Now i am not encouraging people to be less charitable far from it, after all, we need as many people possible in our society to do their bit, but know this there are services, charities doing all they can to help those you see on the streets. If you want to practically help people on the streets, why not get involved with the charities, volunteer your time, work alongside those trying to help, if you haven’t got the time, then donate your cash to a local big issue vendor or a local charity.

If you were after an answer, then I am sorry to disappoint as there is no right answer, the only person that can answer that million-dollar question “Should I give money to people who beg” is YOU nobody can tell you what to do, but before you hand over your spare change please base your decision on an informed one, go out, do your research ask your questions, then decide…