I find it hard sometimes working in the recovery field, in one breath I am promoting recovery and that it is possible, but in the other breath, I know that this isn’t always the case.

I use the Prochaska and DiClementi’s cycle of change a lot in my work (see diagram below) it is a great tool to help people identify where they are at in their addiction. For a couple of years, dad went around the cycle like a fucking Catherine wheel, with every relapse brought hope, an opportunity for change, but it never lasted long. 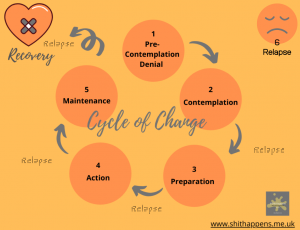 After about 18th months into dad’s alcoholism, his cycle started to go anti-clockwise, I hadn’t heard about End Stage Alcoholism, none of the medical staff mentioned it (Or maybe they did and we were too stressed to take it all in) this cycle takes the addict and the family on a very different journey. 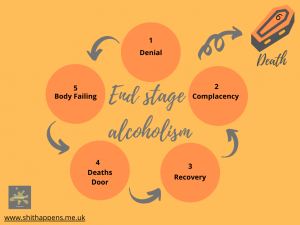 1. Denial – Dad knew he wasn’t well, but it was never the alcohol, he would try to minimise the levels of drinking from the doctors, even though his deteriorating health, failing liver was because of his drinking. He had been told on numerous times that “If he continued to drink he would die” but the fact he was still breathing was evidence that anything the doctors said was a lie, only enforcing his rational that drinking wasn’t the real problem – I recall the time as if it was yesterday when dad took a sip of his Jack Daniels and coke refusing to take paracetamol on the grounds that it was bad for his liver, the level of denial was insane.

5. Body Failing– His liver was no longer functioning, he had no appetite, he started losing control of his bowels, His belly would bloat making him look pregnant, his skin turned yellow looking like Homer Simpson, his skin was also getting thinner and bruised more easily. And despite all of this he still claimed “it wasn’t the drink”

4. Deaths Door – Hospitalised again, with what seemed a never-ending cycle of health problems, enforced detox to treat his non alcohol-related health conditions. Following the detox and with a clear mind he would swing between either being apologetic or angry that he was back in the hospital.

3. Recovery – Dads back, sometimes he would have a newfound sense of determination, this time would be different, he would go Alcohol-Free, or stick to a beer, promising to stay away from the top shelf.

2. Complacency – I’m feeling loads better, I’ll have just one, it won’t be the same, I’ll stay away from the spirits and stick to cans of beer. But it never last, before long he would be back on the spirits and the cycle would start all over again.

1. Denial – back to square one

When tough love is no longer an option

Unlike say an opioid overdose death that can happen in a matter of minutes, dying from end-stage alcoholism is usually slow, painful and undignified. We had done our mourning for the person he was before the drinking had taken ahold. Tough love wasn’t an option for us now, some of the health conditions, side affects of his drinking could not be ignored.  Enabling and caring was the only option. We talked a lot with dad, about what he wanted, he didn’t want to be sent back to the hospital, he was as sick of the cycle as much as we were, he had accepted defeat and wanted to die at home, unfortunately this didn’t happen overnight.

Here are some of the  comorbidities that dad suffered

Cirrhosis of the liver caused others near-fatal side effects

Korsakoff syndrome -is a neurological condition found in end-stage alcoholics. It develops due to a thiamine (vitamin B1) deficiency (although this wasn’t diagnosed, dad definitely displayed many of the symptoms)

Hepatic Coma was given days to live, he survived but then contracted MRSA, resulting in bedsores which required new dressing every day.

Ascites – where fluid accumulates in the stomach

Jaundice – a resulting from Liver Disease

We resigned ourselves and essentially started providing palliative and end of life care the best we could between us. But this was hard, it went against everything I believed in, I felt like an accomplice assisting dad to slowly kill himself which was the last thing any of his loved ones wanted for him.

Caring for someone who is at end-stage alcoholism can be traumatic, often the addict is so out of it they are often unaware of the severity of their condition, but the carers are.

It’s at this point that the carers of someone who is at end stage, need support, not well-meaning advice or ideas about how to get your loved one into recovery, it has gone way past that, the bottom line is that unfortunately, not everyone recovers from addiction.

Try not to be afraid of who you truly are.

I don’t write for financial reward or gain, I just want to help share my lived experience with others in the hope that it helps. And I just love to write, so if ya fancy getting the occasional email with the most up to date blogs from yours truly, please feel free to subscribe at the bottom of the main page.