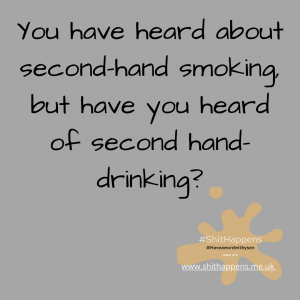 So back in the day second-hand smoking really changed public opinion and paved the way for legislation to make bars and public places smoke-free. There was some resistance, I resisted it myself particularly when us smokers weren’t allowed to smoke in say pubs or in shopping centers.

When the impact of second-hand smoke was explained, people started to make the link that someone else’s smoking was the reason for their asthma attacks, respiratory infections, ear infections, heart disease, or lung cancer.

As this understanding grew, more people gained the information and the confidence they needed to take a stand against a person’s cigarette smoke. The awareness enabled people to think about doing what they needed to do to protect and repair their own health, regardless of whether the smoker stopped smoking.

So, let’s apply the second-hand smoking analogy to drinking

Living in constant fight-or-flight stress response, which was repeatedly triggered, never knowing whether I would find dad dead, or injured as a consequence of falls.

Or all the arguments with other family members and friends about dad’s alcohol consumption and his behaviour and my inability to walk away.

The emotional abuse caused by his manipulative behaviour, like the time he told me he had cancer by way of justifying his drinking, which was a lie.

Or trying to manage his mental health, such as dealing with late-night calls that he was going to kill himself.

Feeling constantly defeated and exhausted by dad’s inability to see how he was slowly killing himself and having to stand by and watch him commit slow suicide.

15 years on, I have come along way, I have been able to heal from a lot of the consequences of second-hand drinking. Some people might say OR think “trace its time to move on” but I can’t, I feel so passionately for those who are still suffering in silence and who are often overlooked because all the attention is focused on the addict.

I feel grateful that there is more and more research being done into second-hand drinking and the effects. A study in 2015 found that an estimated 53 million adults — or nearly 1 in 5 — said they had experienced at least one harm attributable to someone else’s drinking in the past year. NOW that’s a lot of people!

It’s a relief to hear researches are starting to recognise what I and others affected by a loved one’s addiction have been saying for years.

So when I hear quotes from the likes of Sir Ian Gilmore, the chair of the Alcohol Health Alliance and the director of the Liverpool Centre for Alcohol Research, saying “There is undoubtedly harm from second-hand smoke, but the range and magnitude of harms are likely to be even greater from alcohol.” I finally feel heard.

So to summarise – Second-hand drinking can be defined as the negative effects people experience by being around those who drink alcohol excessively.

And just like second-hand smoking were people were able to think about doing what they needed to do to protect and repair their own health, regardless of whether the smoker stopped smoking. If you are a family member or friend and you believe you are affected by second-hand drinking you too can take steps to repair your own health regardless of whether the drinker stops drinking.

Seek out support there are so many sources of support available, mainly online and telephone at the moment due to COVID

Educate yourself, even since dad passed, I have continued to educate myself and others about the often-unseen impact addiction has not just on the addict, but the impact on their loved ones. Adfam is a good source

There are some GREAT books out there such as

If you loved me you would stop

And on a final note, If you are a dependant drinker and you think that your drinking is just harming you, then I would say to you…

6 thoughts on “You have heard about second-hand smoking, but have you heard of second hand-drinking?”