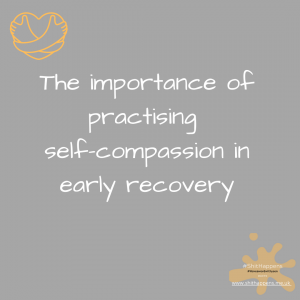 I am not a woman faith, I simply cannot get my head around buying into ancient stories told many years ago, by a man who I have never met. But I did learn an important lesson during my early recovery and it was in a church.

Years ago, I was at a friend’s house one day, having a coffee when another friend of hers called round for a chat. I’d never met her before, but as my friend introduced her to me, she told me that as well as being a mate, she was a medium. I scoffed at the thought, she looked far from being someone I would have thought a medium, whatever they are supposed to look like. She sat opposite me at the table and started to tell me how she could see I had just been through a bad time, but that things were looking up for me. I wasn’t impressed by her forwardness, I mean I hadn’t asked for a bleeding reading.

I laughed, she couldn’t have been further from the truth, I hadn’t just been through a bad time, my life was a fucking mess. I’d not long since come out of Middlewood, I was living in a one-bedroomed flat, with two kids and had nothing to my name, I remember thinking, ‘you haven’t got a fucking clue mate.’

She said that she could see me at the cathedral in the city centre, I scoffed at her words, I had never been to the cathedral and had no plans on going neither. She said some other things, but to be fair I took no notice of her. I didn’t stay long at my friends that day and left thinking she was a full-on weirdo, so disregarded everything she had said and never thought about her again.

A few months had gone by since my encounter with said weirdo, life was still rough. I had recently been given a three-bedroomed maisonette but had no money to furnish it. I was a single parent trying my best to make their lives as normal as I could, ashamed of myself as a parent for allowing my kids to live with nothing. I had walked away from my old associates, and the familiar chaotic lifestyle, I had stopped buying and selling stolen goods. I was no longer using, I had been clean for a while, but it was still hard. I had to sell my beloved car to help make ends meet, I was lucky at the time to have a closed friend who had been recently banged up and insisted that I make use of his car to help me out. Apart from the close family, the only person that I relied on was a CPN nurse who would come and visit me once a week for support.

One morning, I had a sudden urge to go to the church, at first, I tried to disregard the thought, I had hardly any petrol in the car and I certainly had no money for parking. But it wouldn’t go away, something, someone said ‘it’s ok, it will be ok’ as I drove into the city centre, I felt a sense of calm, a sense of purpose a feeling I hadn’t felt for a long time. All I knew was that this feeling was something different, a sense of calm that no amount of drugs had given me, despite all the promises.

I parked outside the cathedral, I remember thinking how large it was, being close up and wondered how I would get in or even if a building of this stature even opened its doors to members of the public or people like me who had no faith. Thankfully the entrance doors were open, walking in slowly I noticed how the building was cool, but at the same time, it was warm and inviting.

This is the first time I had ever stood inside the building; I had walked past it many times in the past during visits to the city centre. I was in awe if of the architecture, the intricate designs that had been crafted out of stone, by someone’s hands many years ago.

There were rows and rows of benches in front of me, with only a couple of people sat silently apart doing what? I didn’t know. All of a sudden, like being woken from a spell, I looked around and questioned why I was there, I felt out of place, I questioned ‘I didn’t belong here’ and was in two minds to turn around and walk out of the building, but something, someone said, ‘it’s ok just keep walking’.

The silence was deafening as I walked deeper into the church. To the right of me, I could see a set of benches separate from those in the main hall, I made my way there. I sat on one of the benches, I looked up and thought ‘now what?’

As I sat down and I felt vulnerable, I felt an overwhelming sense of sadness. My mind took me back to recent events and I shuddered at the reminders, ashamed of how I had hurt loved ones, but also hurt and angry towards those who I felt had let me down or who had hurt me. The memories came in waves my emotions got the better of me and I realised I was crying, silently. For a moment, I was glad I had chosen this part of the church, out of the way from the others so that they couldn’t see my tears.

Alone in my thoughts, I recalled each memory that had brought me pain and heartache, but as the pain started to peek, I was enveloped by what felt like two big arms, wrapped around my shoulders and heard whispers of someone saying, ‘it’s ok, let it go’. One by one the memories came, heartache bubbled, threatening to overwhelm me but just as it reached its peak, I heard the comforting words followed ‘it’s ok, let it go’. As well as the comforting words, it physically felt like someone, something was washing away the pain and hurt that I must have been carrying around, for how long, who knows. All I know is though that it felt like nothing I had ever felt before.

At one point, I panicked, I suddenly remembered my car parked outside without a ticket on it, worried that when I returned that there would be a yellow ticket. A fine I was in no position to pay, but then the words came again ‘it’s ok, let it go’.

I don’t know how long I sat in the church, but I stayed there until there was nothing left, no more tears, but best of all, the sense of sadness that I had been carrying around with me since walking out of the gates of Middlewood was no longer there.

I have never felt calm like it, I felt like a different person. As I walked out of the church doors, I felt like I was in a parallel universe, it was like walking into a different world. The hustle and bustle of buses and people going about their day to day business. Shoppers were completely oblivious to little old me standing there, still confused about what had just happened to me. I felt a sense of lightness as I walked towards the car and even before approaching it, I knew that there would be no yellow ticket waiting for me. And when I got there, there wasn’t, and it wasn’t until a few days later that the conversation I had previously had with the said ‘weirdo’ came back to me.

I still to this day don’t know who was talking, who was comforting me or even if it was me comforting myself all I know is that it felt like I had truly experienced compassion for the first time in my life. During some of the lowest moments in my early recovery, I learned the importance of self-compassion and it is something I still practice to this day.

I often find that I have an abundance of compassion for others, but still to this day find it hard to save some back for me. There are still times when I doubt or mentally berate myself, but then I’m taken back to that memory in the church. It’s a reminder that I don’t have to carry negative thoughts or feelings, I can choose to let them go. So when I am feeling low, I make time to practice some self-compassion.

Investing in self-compassion takes time to accumulate, you cannot buy it off a supermarket shelf, it isn’t like winning the lottery where it happens to a small amount of ‘lucky people’ anyone can acquire it and it is something that can be learned and cultivated.

Practising self-compassion is about treating yourself with the same kindness, gentleness, and acceptance you likely already extend to others. it about accepting that falling short or being average is simply part of being human, and therefore unavoidable.

So, if I’m, feeling low I will often take myself off into a corner practice a little self-compassion, go Haveawordwimesen and tell myself ‘to let it go’ and remind myself ‘I’m doing my best’.

Do you invest in self-compassion? If you don’t? why not open your own Self-compassion bank account, there is no joining fee, just a willingness to be kinder to yourself. You can make a daily or weekly deposit of self-compassion and before you know it you will be the wealthiest person you know.

My circumstances have changed a lot since living in that bare, three bedroomed maisonette on Arbourthorne, but if I have learned one thing in the past 50 years, it is that whilst material wealth can be nice, it isn’t as important as our mental & emotional health. I could have the nicest house, car, or holidays abroad, but it is worthless if I don’t like myself.