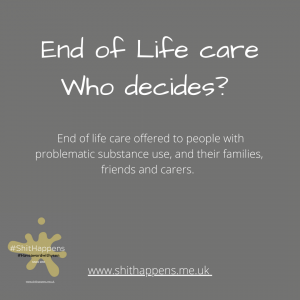 There were rare lucid moments during Dads alcoholism when he seemed to understand the gravity of the impact alcohol was having on his health. There were numerous times after being released from the hospital that he resolved that he wouldn’t drink again. He tried non-alcoholic drinks, but that didn’t last long. He tried sticking to drinking Lager, avoiding spirits or what he referred to then as being “the top shelf”, sadly his attempts didn’t last long.

He flatly refused even the suggestion of support groups, the mere thought of baring his soul in front of strangers was completely alien to him, after all, he was a “proud man and support groups were for whips” he would say. But his reluctance to accept help only fuelled his denial that he could “do this, sort this” on his own. Dads bloody-mindedness caused one of the biggest challenges not just for me and his family, but also for the professionals, who were responsible for his care.

We became acutely aware, particularly in the last 18 months of Dad’s life, that Dad had a serious physical dependency on alcohol as well as the psychological dependence, which made it more difficult to treat. But I was unaware that dads drinking had got to what’s (not) commonly known as End Stage Alcoholism. Looking back, I now realise that all the signs were there.

In the last 12 months, in particular, he started to experience many of the comorbidities that occur with end-stage alcoholism. He had been already diagnosed with Cirrhosis of the liver and as a result suffered regularly from Edema (Accumulation of fluid in the legs), Ascites – (Accumulation of fluid in the abdomen). Dad bruised easily and suffered from abnormal bleeding. He suffered terribly from Cellulitis which made his skin as thin as tissue paper and would frequently tear. He showed all the symptoms of Wernicke-Korsakoff syndrome, which develops due to a thiamine (vitamin B1) deficiency. And despite all of this, Dad continued to drink.

He’d slipped into a coma, several times, he had severe memory impairment and was often confused. His refusal to work with medical staff because “He knew better or he knew what was best for him” was at times both exhausting and infuriating, but at the time what could be more frustrating was dealing with the staff.

During each hospital admittance, we would have to go through the rigmarole of trying to explain Dads alcoholism to staff who had never had the pleasure of meeting him before. I felt for the nursing staff who didn’t understand the sometimes-outrageous behaviours and actions of a man who was being detoxed of a substance that was slowing killing him, but who would refuse their attempts at caring. I always felt a sense of relief when dad had been returned to a ward, where staff had, had the pleasure of caring for him before, who understood his case history and could work with his sheer bloody-mindedness.  I could sometime see the frustration and disdain in some of the staff’s eyes, who seemed to resent treating someone whose health conditions were in their eyes “self-inflicted”.

I would often wonder if they would have been inclined to treat Dad differently if he was in being treated for cancer, I strongly suspect they would have.Towards the end, Dad hardly drank, but it was too late the damage was done and deep down he knew it too.

Every time he was released from hospital his physical and mental health only seemed to be deteriorating further. We no longer wondered “would Dad Die” and started thinking “Not if, but when?”. Which makes me contemplate the question “Could Dad have been offered palliative care sooner?”

Dad had carers, but their primary role was to tend to his bedsores that had developed after spending prolonged time in the hospital after contracting MRSA. More often than not, it would be the carers who would make the call for the ambulance. Dad would be furious because all he wanted to do, was die at home and to be left alone. But he wasn’t allowed that right.

Everyone is entitled to refuse healthcare treatment, however, the one exception to this rule is if the health professionals in charge of your care think you cannot make an informed and voluntary decision then that right is taken away. After coming around the staff would be met with a tirade of anger and frustration from, staff deemed him difficult but all he wanted to do was say at home and die.

On the morning of Dads last day, we were concerned we’d found him on the floor his breathing was very laboured, but compos mentis enough pleading not to be admitted again. My sister worked for the NHS district nursing team at the time, she’s called a colleague around for some advice. When she arrived, dad was still adamant that he didn’t want admitting to hospital, “I want to be at home wi me babbis” those were his exact words, so she made a call to his local GP. The GP arrived and it transpired that his laboured breathing was because he’d contracted pneumonia AND because he’d heard Dads wishes himself, Dad was finally allowed to stay at home.

The doctor arranged for a Marie Curie Nurse to come around, which surprised me because I thought that they were just called for the end of life cancer patients. The Marie Curie Nurse was amazing, I remember feeling guilty that Dad was being treated for end of life because of his alcoholism when she could have been treating someone from cancer. But she explained that their role was to free nursing care to people with all terminal illnesses as well as support for family and friends.

During my researching for the book, I am learning more and more. I recently came across a research project, which ran for two years between 2016/18, funded by the Big Lottery the research programme was the first of its kind to explore current practice and service experience from a range of perspectives around the end of life care offered to people with problematic substance use, and their families, friends and carers.

As part of the project, they interviewed the patient, health care professionals and their loved ones. They have created a brilliant website https://endoflifecaresubstanceuse.com/ which is AMAZING

As I listened to the family’s stories, I immediately felt I wasn’t alone the guilt and shame and the denial that comes with addiction.

Marie Curie has some helpful information for families caring for someone at the end of life due to substance misuse.

I truly believe that as well as the patient all families have the right to be heard, assessed individually, given appropriate training and information to allow them to support their loved one safely, to be able to plan with ongoing support and monitoring from healthcare professionals.

I don’t write for financial reward or gain, I just want to help share my lived experience with others in the hope that it helps. And I just love to write, so if ya fancy getting the occasional email with the most up to date blogs from yours truly, please feel free to subscribe at the bottom of the main page.

2 thoughts on “End of Life care, who decides?”