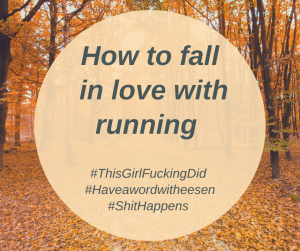 In the absence of friends, there are always strangers.

I have a love-hate relationship with social media, and I wouldn’t normally advocate someone reaching out online for support, but I did earlier this year. So here I am I wanted to share my experience with you. I also want to use this blog to take the opportunity to say a BIG thank you to all the lovely ladies. All of whom were complete strangers who have supported me over the past few months.

It’s been years since I have picked up an illicit drug to manage my thoughts, feelings, and emotions, but here I am twenty plus years later, and I am STILL looking for ways to manage my mental and emotional health.

Last year, like so many others, I was banished to home working, And I am not ashamed to say that I’ve had some wobbly moments since then.

Not being able to socialise, hug a mate or offload my woes in the company of others when I have needed it most has meant I have had did deep and to rely on myself more. Most of my conversations have been between myself, a wall or the bleeding mirror.

Apart from work (which I love), I had lost my sense of purpose. I had also gained some unwanted weight, an indication for me that I was letting myself go. But worst of all, what with all the bleeding restrictions, I had nothing really to look forward to. That was until I got a call from my best mate, Shauna. She cajoled me into agreeing to do the London landmark Half Marathon (LLHM) with her. She’d initially been supposed to be doing it with a mate last year. Her mate had completed her run virtually, which meant Shauna would have to do the race alone.

I wasn’t averse to running, but I had fallen out of love with it. In fact, the last time I’d trained for a race, it was for the very first LLHM, back in 2015. But the thought of Shauna running alone and the training might help motivate me during such an unmotivating time that I said “FUCK IT” and signed up!

Almost every day started with an internal argument in my head,  before I could even get my arse out of the door. Worried about what other people walking their dogs might think of me or, even worse, being heckled from a passing van window from a guy shouting.

I started heading out as early as possible to avoid judgmental, preying eyes. I went back to basics and did a combined walk with little runs. Something I now know is commonly referred to as Jeffing  but it was hard.

I only tried jogging for less than half a mile before I was blowing out of my arse and gasping for breath. So much so, after the first attempt, I even considered backing out. But after a few attempts I started to feel something that I hadn’t felt for a long time. A sense of personal achievement.

I hadn’t realised just how unfit I had become over the past year. I don’t know why i was surprised though when i considered before COVID, I used to be running all over the city centre from meetings to meetings. Whereas the last year my daily commute has consisted of walking across my landing from my bedroom to the converted makeshift office.

The mental torture I would put myself through the night before and on the morning of a planned run was insane. Once I’d gotten my sorry ass out of the door, and after a few steps, I felt mentally clearer, and despite feeling physically knackered and the aches and pains, my body suddenly felt alive again and for the first time in ages, I started to think with alot more clarity.

I’d casually mentioned in passing to Louise, a work colleague, over zoom, not long after signing up about my stupid idea and how I was regretting my impulsive decision. She laughed

“That’s not compulsive. I’ve just signed up for the 2022 Brighton Marathon”.

I was impressed, in awe even, but then she mentioned that she too hadn’t run for years until she found this online women’s group called Booty Fit. Apparently, they advocate slow running, she also mentioned something else about monitoring your heart rate, which sounded a little too technical for me. According to Louise, it was the best thing she had ever done!

She went on to explain that adapting a slow running technique was weird at first but that it wasn’t long before she found herself running further than she had done in years and best of all, she’d got her running mojo back. AND apparently, they were due to launch another of their FREE 5-day courses called “How to fall in love with running” – how apt eh! Just what I needed.

So as soon as the meeting ended, I googled them and signed up and waited for them to send me my invitation to join the closed Facebook group. My invitation came on the 10th of May, which was a good fucking job because the LLHM was only three months away. Sunday, the 1st of August, to be precise.

At first, I was slightly sceptical? “I mean, how was an online running group going to get me ass out of the door?” But one by one, as new members joined and introduced themselves I realised I wasn’t alone.

Some ladies hadn’t run for years, others had only just taken up going for walks, whilst some (not a lot, I hasten to add) ran regularly, and some were even training for full marathons. I tried my best to put my reservations to one side and logged on for the first of many daily live updates, which was fronted by this lady called Aislinn.

She shared her own personal challenges and some of the obstacles she’d overcome, but what drew me in was her passion for women and their mental health. She proudly announced how Booty Fit had recently been nominated as part of a local campaign to raise awareness about International Women’s Day

Aislinn’s honest and no nonsenses approach drew me in as she offered to share some running techniques for us all to go away and practice. The only condition was that we all checked back into the group with our updates.

I usually have a love-hate relationship with Facebook groups. They can tend to be clicky, but not this one. It was different. All the members had something in common, they were either suffering from one or more of the following – self-doubt, lack of confidence, low self-worth or struggling with the demands of juggling home life balance and kids. And others adjusting to a life of home working, and nearly everyone was in the throes of the menopause or in the peri stage – Just like me.

My experience of the “How to fall in love with running support group” reminded me of all the substance misuse mutual aid support groups that I help coordinate at work. Connection in early recovery is vital, especially as addition can take individuals to very isolating places, emotionally, physically, and psychologically. So it is vital to have a network of support groups where individuals can share their similar experiences to help inspire and support others on a similar journey. Sadly, due to COVID they too had to quickly adapt and take their face to face support groups online.

The German sociologist Ferdinand Tonnies defines a community as “an organic, natural kind of social group whose members are bound together by a sense of belonging created out of everyday contacts covering the whole range of human activities”. He also says that being part of a community can profoundly influence our perspectives and personalities.

For me, after feeling isolated for such a long time and coming across Booty Fit, I finally felt like I had staggered into a whole new community filled with my very own cheerful cheerleaders. We post accountability posts (set our intentions) daily. Somehow subconsciously, this makes me feel like If I don’t run, I won’t just be letting myself down, but that I’ll be letting the other women down too.

I completed the LLHM in 3hr.35mins in complete agony due to a non-running related injury. That day I also met Aislinn and Shelley, the owners of Booty Fit on the day of the marathon and had the opportunity to thank them personally for setting up the group. 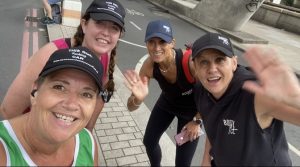 My return to running, jogging, jeffing and a whole lot of EFFING hasn’t been easy, but it has to be by far one of the best personal achievements for me during 2021.

I had no intention of continuing with running after the LLHM, but guess what? I’m still running. Better still, I’ve even started to lose some much-needed pounds. I turned 51 this year, a stark reminder that I am on the wrong side of life! but I have learned that despite my age I can still RUN.

Since joining, I’ve #Hadawordwimesen to try and retrain my brain to focus less on the pace and more on enjoying the run and other stuff. Like taking in the fresh air, taking advantage of having half an hour day away from the computer and taking some time back for me, which had well and truly fallen right off the top of my ‘to do list’.

But best of all, all this running has also helped me fall back in love with my writing.

So this blog, ladies, is  for each and every one of you  – Thank you for all your honesty, encouragement and constant support. 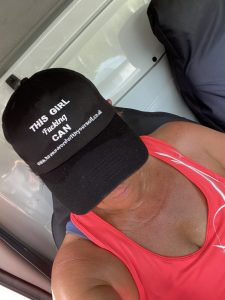 4 thoughts on “How to Fall back in love with running”