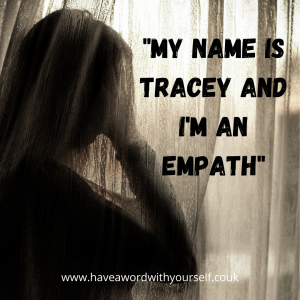 Are you in Recovery? Are you struggling, finding it hard to process your emotions and feelings? Have you ever heard of empaths? If not, have you considered you might be one?

I had never even heard of the word empath until a few years ago. Whilst I had learned a lot about myself in my early recovery journey, I would often still find myself struggling emotionally. Someone once suggested I might be an empath. I decided to do a little more research, and suddenly a load of penny’s started to drop!

Empathy is the ability most humans have to understand the way someone else is feeling. We all have it, but how much empathy we feel is on a scale, and some people feel it more intensely than others. People very high up on the scale are known as empaths, and they take empathy to another level. There are loads of test you can do online to help you identify where you might score on the empath scale. To give you an idea of what I’m talking about, this very short video might give you an idea of what is an empath.

Dr. Judith Orloff describes empaths as people who absorb the world’s joys and stresses like “emotional sponges.”  She also explains that empaths lack the filters most people use to protect themselves from excessive stimulation and can’t help but take in surrounding emotions and energies. I’m not a total empath, but I am highly sensitive to other peoples feelings and emotions, they were like a magnet I always found it hard to not get sucked in.

I used to always say that being sectioned was the best thing that ever happened to me, I now know why. For me the temporary relief from being away in a mental health ward after a period of numbing my feelings and emotions with drugs provided me with some uninterrupted thinking and reflection time. Time to reflect about what had been going on for me. Time to explore  contributing factors/people and more importantly how I was emotionally responding/reacting my environment at that time. I left that place knowing that in order for my recover to stand any chance I needed to cut ties with certain individuals.

Some people might consider being an empath a gift, and it’s not hard to understand why. Empaths are good at making people feel at ease. They tend to be the ones who are at hand at people greatest times of need. Many of the traits of an empath include being compassionate, helpful, good listener. But as I reflect on my past life, I can understand how these traits it felt more like a curse. Let me explain…

The curse of being an empath – I have always felt different somehow from a very young age. Deep, emotional only at that time. Only I didn’t have an outlet to express the feelings, let alone explore or process them. As a kid, I was like a social butterfly. I was desperate for my best friend, but I always found myself worrying and focusing on their needs. Also known as people pleasing. It didn’t take long for me to give up on friendships, before moving onto the next person. I struggled for years trying to understand, let alone understand, my feelings and emotions. Any displays of frustration was often interpreted as being difficult, which left me feeling misunderstood and even more isolated.

My mother was a victim of domestic abuse at the hands of my father. And even though I had never witnessed the physical violence first-hand I always knew it was there. I felt suffocated by anxiety and the sense that something wasn’t quite right. I quickly sensed and felt other people’s emotions as if they were part of my own experience. My happiness was always dictated by someone else’s and vice versa; I found negative people emotionally draining, in fact I still do to this day.

I have always sensed if someone was being truthful or not. I could always hear what people weren’t saying. I have always been a good listener – I found it easy to put myself in someone else shoes, but I never felt comfortable wearing my own. I felt highly attuned to others’ emotions but felt overwhelmed by my own.

When I entered my first serious relationship, I sometimes felt overwhelmed, trapped almost. I felt constantly manipulated like I was being used, but I could never put my finger on why? I now know that empaths and narcissists are the worst kinds of combination. Because empaths have a lot of compassion and understanding to give, whilst narcissists thrive on someone worshipping them. This is made worse because, being an empath, I tended to forgive everything the narcissist did, which explains my inability to leave the unhealthy relationship sooner.

Empaths tend to take on the problems of others as their own. It is often difficult for them to set boundaries and say no, even when too much is being asked of them. This is why I really struggled when caring for my alcoholic fathers years later after my own addiction. I would get angry if people accused me of being an enabler. I now know I reacted like this because telling an empath not to care is like telling a narcissist to think of others before themselves.

I’ve learned a lot about myself over the years, but learning about what it means to be an empath  provided a whole new level of awareness and meaning when it came to my early recovery journey and my ongoing personal development. When I dug deeper, I found that the act of using was almost always linked to an incident (trigger) that incited an emotional reaction and my way of coping with that emotion or feeling was to use. And I am not alone.  I have worked in the addiction field for over 25+ years. I have sat in hundreds of support groups and have listened to others who have shared similar experiences and the inability to express emotions or have an outlet for their pain is a common theme.

Reconnecting to myself – Being more attuned to my feelings and emotions has helped me cope better in my personal life and social situations and my work. Although, I have to admit, it isn’t not always easy. I still need make time out, time to figuring myself out or as I prefer to say #Havingawordwimesen. This has been critical in order for me to sustain some sort of sanity  in what sometimes feels like at times an insane world. For years, especially in the UK, the culture has been to toughen up and quotes like “boys don’t cry” or “Suck it up” certainly haven’t helped.

Want to know more? There is a great article called ‘What does it mean to be an empath?’– there is also a link to Dr. Judith Orloff’s book The Empath’s Survival Guide. There are also loads of survival tips and advice on being an empath; I find it fascinating that most of the advice offered is the very same for people in early Recovery. Stuff like understanding your triggers, watching your thoughts, exploring forgiveness, scheduling some ‘You Time’ and practising gratitude.

Thank you for taking the time to read and remember try not to be afraid of who you truly are, be proud of your Recovery.

5 thoughts on “Empath’s in Recovery”