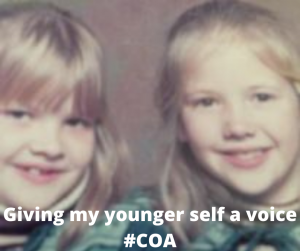 As you are aware, I am writing my memoir about my own journey with addiction and caring for dad with Alcoholism. I have worked in the addiction field for years and only recently came across a project called NACOA. In the summer of 2021, I came heard about a poetry competition they were running and thought I would submit some of my poetry. They had hosted an exhibition in Brighton showcasing all the stories submitted. I didn’t win but entering the competition wasn’t about winning. I just thought it was worthwhile sharing if my poetry could help another child or adult child.

Fast forward to the beginning of this year, I received an email from the Oasis project asking permission to publish my poetry in a book. I was even more thrilled when they asked if I would be willing to read my poetry live at their online book launch. Before the launch went live, I had prepared myself, ready to read my two poems. But what was supposed to be an online book launch turned into a unique and unexpected emotional support group experience.

Let me explain -During the throws of dad’s addiction, I was well aware that I had lost sight of myself in trying to fix dad, so I reached out for support. I attended a couple of Alanon meetings, which had been helpful to a point. However, nobody had the same relationship with the alcoholic as me. I had heard about Alateen groups, but they were for younger children, teenagers, not adult children of alcoholics, like myself.

Being an atheist, I struggled with the concept of a higher power. Also, I was not too fond of the concept of tough love because I knew that no amount of tough love would stop dad from drinking. So, I finally gave up on Alanon and started to develop my own support network, made up of trusted friends and family. With the help of my support network, I soon figured out that it wasn’t just the drinking and all the agro that came with Dads Alcoholism.  It was mine and dad’s relationship (or lack of it) before the drink came along that caused me the most internal and emotional conflict. I have written about this previously and how past resentments interfered with my ability to care.

It’s generally a given that as children, we know that the tables will turn at some point in our older years, and we will be in the position to return the same love, care and affection to our parents in their old age. However, I’d grown up receiving nothing from my dad, only rejection. It had taken me years to try and overcome feelings of not being wanted, the heartache of rejection after all my failed attempts of affection. I had finally gotten to a place where I could accept that my dad was different to other dads. So much so when he came back into my life, some of the wounds that I had thought healed had slowly started re-open.

I thought I had healed some of those re-opened wounds through my writing. Or so I thought…

The night of the Book Launch – I hadn’t expected to get emotional during the event. After all, It’s been over 16 years since dad passed. But as the event unfolded so did my tears, unleashed after years of grieving and coming to terms with his death. Just another reminder, a wake-up call, that I still bear the scars side effects from what was at the time an extremely traumatic experience.

Brought together by the power of zoom, the faces staring back at me were strangers, but one by one, as people started sharing their stories/poetry, I felt an instant connection, an invisible bond. Bound by our personal experience of having a parent who was an alcoholic. I resonated with parts of people’s stories and shared experiences that could have been written about myself. Including feelings of confusion, anguish, anticipation, disappointment, betrayal, feeling conflicted, sadness, resignation, guilt, grief, hurt, humiliation, the shame. The list goes on and on. I had never considered or thought to self identify as a child of an alcoholic, even though I am one, not until that meeting.

I thought that it was only me who felt like I did until I heard the stories and poetry from some of the other COAs in the room, and for the first time in years, I finally felt that I had found my tribe.

You would think that revisiting and writing the memoir is a painful experience, but it’s quite the opposite. Writing is like having my very own therapist, but it has helped me not just process some difficult emotions but has also helped me get through tough times and to a place where I have NO regrets. I am forever grateful that I never turned my back on Dad. Because had I done that, I would have had the opportunity to help heal some of my open wounds, and more importantly, I would have missed out on the unique bond we developed during his last years of life.

As well as sharing my experience, I also wanted to say a massive thank you to Ceri, a multi-award-winning filmmaker who shares her own lived experience of growing up in the shadow of a parent’s alcoholism. But who also organised the event and launched her latest film.

I would also like to say a MASSIVE thank you to all the people who took part in the online launch, which can be found HERE  if you would like to watch or better still if you want to purchase a copy of the book. NOTE all funds raised go back to this fantastic project. Below are the two poems I submitted

I so want to believe you,
I really do
You always sound so sincere,
You have that special knack of knowing exactly what I want to hear.

I really want to believe.
I’m so desperate for you to succeed
I want you to see the light
So, you finally give up the fight

I can see that battle that goes on in your head
Trying to remember what you’ve already said
Tripping up on your lies,
But I can see Dad. It’s in your eyes

I pray for a reprieve, for the penny to drop
Hoping that one day you might finally stop
Why can’t you see that your enemy is the drink?
You can’t walk, let alone think!

You’re not just lying to me.
Look in the mirror “can’t you see!”
The constant denying the lying,
It’s getting tiring

Turn those words into action.
And stop using them as a distraction.
I know my words are harsh.
They are not intended to make you cry
But I can no longer lie

Dad, this battle will never end.
Until you realise the drink isn’t your friend

Life after caring – the void

I have dreamt of this moment, and now that it’s here
I’ve changed my mind
Come back Dad
“There’s nothing to fear.”

I have finally been released.
From fight or flight mode
You’d think I’d be relieved
But I find I’m at a new crossroad

I have chosen the latter.
I know that’s what you would have wanted
I wish it were that easy
I still times I feel haunted

I tried to reach you.
But you couldn’t see
Locked in your addiction
You couldn’t find the key

I have pledged myself
Your death won’t be in vain
It can’t…
After all, there are millions of others
Who are going through the same?

The void is still there.
I don’t think it will ever go away
But I now have the strength and the courage
To make it through another day

Remember, I don’t write for financial reward or gain. I just want to help share my lived experience with others hoping that it helps. And I just love to write, so if ya fancy getting the occasional email (NO SPAM) with the most up to date blogs from yours truly, please feel free to subscribe at the bottom of the main page.

5 thoughts on “After years of searching, I have finally found my tribe – COA”