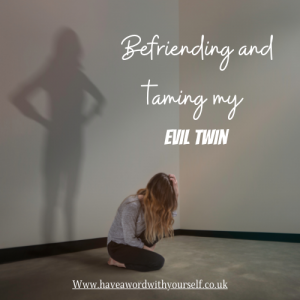 Imposter syndrome was the topic of conversation at this week’s MMM writing group. I chuckled to myself because she is someone I know well. I would go as far as to say that I used to refer to her as my evil twin. She would be that little voice in my head that tormented me and told me I wasn’t good enough or mocked me by saying that I was a fraud and teased me that I was going to get found one day. She was a narcissist at heart, and when she was on a roll, her words could cut deep. She had an air of confidence that was so convincing that I sometimes struggled to stand up to her.

Looking back, she has been around for as long as I can remember, but I didn’t have a name for her back then. As a kid, I’d always felt like a fraud, a bit of an oddball, like I never quite fitted in. I found myself constantly comparing myself to others and never felt worthy. Not that anyone would have ever guessed. Over the years, I had created a tough outer exterior to protect more vulnerable parts of myself. I was a walking contradiction. On the few occasions when I had shared sides of my vulnerability, my disclosure was used as ammunition against me. So much so that my vulnerability became my kryptonite, and I would protect it at all costs.

But that didn’t stop the inner turmoil. My evil twin would take centre stage in my head. She was like my shadow, always turning up when things seemed to be going right for me. She tormented me with self-doubt like a broken record with the volume on full blast stuck on phases like

The worst one was “Who do you think you are?” because, quite frankly, I didn’t know myself.

I thought the drugs were the answers to my prayers. They helped me change the stuck record to the point I no longer cared about what people, or my evil twin thought of me. Feelings of confidence and courage that had eluded me my whole life consumed my soul, drowning out the constant noise from my evil twin. I was on a high, and nobody could bring me down. For a short time, I felt invincible.

Others started to see the cracks before I did, but I ignored them. My new arrogant self-refused to believe that I was falling apart. I was convinced that there was nothing wrong with me. Unbeknown to me, I was a walking ticking time bomb.

When the bomb finally went off, my outer shell, the tough exterior I’d worked hard to protect my whole life, was shattered into a million pieces. But the bomb didn’t just expose my vulnerabilities. It also opened the door to let my evil twin back in. There was nowhere to hide. She loved her newfound status. Towering over me, she constantly mocked and reminded me that she’d been right all along and that I should have listened to her in the first place.

Being in that hospital ward, being forced to take some time out from life was the start of many sobering and humbling experiences. As I sat and listened to other patients, I saw a version of myself in their stories. I also realised that I wasn’t alone, and they, too, had their own version of an evil twin. I learned things in that place that I could never learn in the outside world.

When I left that hospital ward, I had no idea who I was or what would become of me. The only thing that I DID know to be true was that I wasn’t a bad person deep down and that everything my twin had told me was based on a lie. As I reflected on all my past negative life experiences, I knew that I had got a lot of amends to make up for and much to prove, but I had something to prove to myself. I also realised that I had a choice and, more importantly, I had a voice and needed to start challenging my evil twin.

My first job on my recovery journey was to start working on being my true authentic self, but to do this I needed to start getting honest with myself. I had (and still do to this day)

I realised that she was (and still is) just a scared version of myself, now, don’t get me wrong, she can still have tantrums, get demanding and take over my thoughts, hence all the writing, it’s the only thing that seems to calm her down. I have also learned to take notice – For me, my scared twin often creeps in when I have lost sight of my authentic self or absorbed too much of the negative narrative that consumes the news within society.

I have learned that when this happens that I must unplug myself from work, the TV, social media to re centre and focus on me or should I say #Haveawordwimesen or practice SHIT LOADS of mindfulness

Right, that’s all folks, I’m off to do some more work on the memoir, speak soon,

Remember, I don’t write for financial reward or gain. I just want to help share my lived experience with others hoping that it helps. And I just love to write, so if ya fancy getting the occasional email (NO SPAM) with the most up to date blogs from yours truly, please feel free to subscribe at the bottom of the main page.