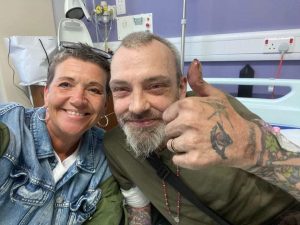 I have lost count of the people I have come across whose lives have been directly or indirectly affected by addiction. Whether it be from families to communities plagued by drug-related crime, which is often complicated by the knowledge that those committing crimes are often victims themselves. It’s like a vicious cycle with no end and like a tornado it’s sometimes hard not to get emotionally sucked in.

One of the first and hardest lessons I was taught when I started working in the addiction field was not to take my work home with me. We are taught early on about the importance of professional boundaries. Our boundaries are like fences. They mark the edges between having a professional and personal relationship, but how do you draw a line between caring and empathy and the emotional boundaries?

Twenty-five years on, I still struggle with it, and this Monday was no exception.

I heard about a passing of a guy I came across during the early days of the pandemic. I remember the day well. I had gotten a strange request. One of the housing managers asked me if I could put a shout out via the Help us Help FB page for some Lego. The Lego was for a chap who’d recently completed his detox from SPICE. He was struggling to keep his mind busy but loved Lego. After successfully acquiring some, I’d arranged to deliver them to him, but this was also an opportunity to have a chat about his recovery options.

We connected straight away. He was charismatic but had a complex past, which haunted him mentally. His alter ego was a guy called Spider, but he preferred to be known as Sean. He had a great support system around him. The staff went above and beyond to help him, but unfortunately, it didn’t last. And whilst he might have given up on himself, the staff around him didn’t, and it wasn’t long before he got himself back on track, but again, it wasn’t for long.

For the next two years, this became a familiar pattern, and the missed opportunities were endless. I’m a sucker for honesty, and his raw honesty drew me in like a magnet. He reminded me a lot of my dad, and there were many times that I saw a reflection of myself in his tears. His mannerisms including his frequent bouts of temper tantrums or vows of silence didn’t put me off because I’d seen it all before. I knew that his anger was just a deflection of his feelings about himself. However, there did come the point when I had to erect my own picket/boundary-fence and take a step back. Our relationship had changed and he’d started, or should I say I had allowed myself to become his personal, verbal, and emotional punch bag and it was starting to affect me personally.

Walking away was a hard decision, I felt like I was letting him down, but I had to put myself first.  I was clear before I stepped back why I was stepping back and that the support would be there as soon as he was ready. I was regularly kept informed and in the loop about his progress by staff who continued to try and work with him. He had more lives than a cat and has avoided death many times, so his death shouldn’t have come as a shock, and yet it did.

The news of his passing had a profound effect on me. Any hopes and aspirations for him to finally get the recovery he craved had been snatched away. Thus pre-empting this blog.

I know that vicarious trauma is an occupational challenge for people working in this field. Continuous exposure to other people’s trauma can be challenging but even more complicated when sharing a similar lived experience. An injustice can trigger anger, and another death can trigger a loss of hope. It’s impossible to escape compassion fatigue or secondary traumatic stress, it’s part and parcel of the job.

I am usually the first to advocate self-care, yet I didn’t after hearing the news on Monday. I continued with my working day, wearing my best game face pretending that I was ok. But I wasn’t, and I paid the price. I struggled through Tuesday, but my mind and body got the better of me and by the end of the day I couldn’t think straight, and I was mentally and physically exhausted. It wasn’t until Wednesday that I finally gave in and allowed myself a duvet day because I needed to be wrapped in safety away from the world.

Self-care is rarely taught, yet it is essential when working in any caring profession. But it requires a great deal of effort, self-awareness, and practice, hence me always havin a word wi me sen. After my “duvet day” yesterday, I have had some time to reflect. To recharge, to lick my wounds, dry my tears, compose this blog, and remind myself that.

Sean’s death was another stark reminder of how fragile life is, I wrote him this poem, not long after meeting him, he loved it and his new nick name Mr Lego Man

But all I see is pain

A man who has trusted a system.

But feels let down again

That’s been prodded and pushed

He cannot be rushed

His spirit has been crushed

The offers of help mean a lot

Too many high expectations

When he has no firm foundations

He tries to conform to societies norms

But sometimes is hard, change feels out of reach

And to top it off

His body is weak

Years of abuse has taken its toll

He does try hard

But is often misunderstood

When he lashes out

It makes him feel worthless and no good

He wants to change

He’s tired of this life

He’s sick of the begging

And all the frigging strife

He is making small steps

He knows he’s got more to offer

He knows his own mind

He’s wiser than you think

He doesn’t just need a shrink

He needs time to reflect

People he can trust

To go at his own pace

You see he cannot be rushed

He just needs some guidance and kindness

And a window of hope

Thank you for inspiring me

Remember I don’t write for financial reward or gain, I just want to help share my lived experience with others in the hope that it helps. And I just love to write, so if ya fancy getting the occasional email (NO SPAM) with the most up to date blogs from yours truly, please feel free to subscribe at the bottom of the main page.