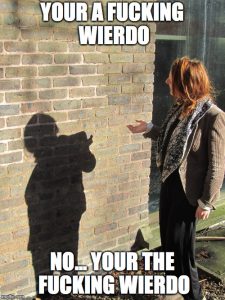 Ive got a confession to make…

Feel free to section me now pleeease. God how I would love to spend another week in the psychiatric ward or ‘Nut house‘ as it was affectionally called. Well it was called that, the ward I was in, is now a lovely housing estate. So now the area is filled with ‘nutters’ who have actually paid to live there I their big posh houses…. ‘Ironic”

On a serious note though, people look at me as if I have grown two fucking heads, when I tell them “I was in Middlewood and it was the best thing that ever happened to me”. Now don’t get me wrong I defiantly wasn’t well when I went in, I was suffering from drug induced psychosis (too much amphetamine use)

But after finally accepting that I wasn’t right in the head, I finally agreed to go, (much to the relief of my family, I can tell thee) I accepted I…

I can now see why the family were concerned though, what they didn’t know was I had recently stopped taking amphetamine. So when my family were telling me I wasn’t making sense I was like “fuck off, theres nowt wrong wi me, its you lot!” during my episode I’d ceremonyously burned every single item of stolen goods or tainted items in our house,  (as I called them) on the back garden, I’d also thrown the last lot of amphetamine on the fire too. For me I was cleansing myself, getting rid of all the badness around me. That included people close to me, if I even smelled ‘yes smelled‘ a whiff of insincerity on someone they were allowed near me! I was convinced that my mobile calls were being intercepted, so that went on the fire too.

I was given a leaflet by a religious guy who lived down the road from us, it was about John the baptist, how he was persecuted for his belief and faith, I was like “whoa thats me!” so I think that when I’d started ranting about being lie John the Baptist my family decided enough was enough.

I vividly recall, standing in the reception at the hospital, whilst my mom was checking me in, thinking “holy shit, how the fuck have I ended up here” and this old ‘BIG BAD FORDY’ wa shitting her sen I can tell thee!

It was late evening when I got there, so everyone was in bed. Mom and Ada (my stepdad) had left me there and the staff were taking me to a ward with about 10 beds in, five either side of the room, none of the curtains were closed (I honestly thought they might have given me my own room for fucks sake) so here I was cacking me sen, taken to a bed, to sleep with a room full of strangers.

By this time, I hadn’t actually had any sleep for over 48 hours, the medical staff offered me some tablets to help with sleep, but that would have meant putting something impure into my system and I was trying to rid myself of anything impure! so after declining tablets, I attempted to sleep. Well, I pretended to sleep, there was a girl who got up after noticing I’d been brought in, who was ranting and raving about how she “wanted to sleep like her!” I knew she meant me, cos she was at the bottom of me fucking bed! its fair to say that, at that time I was was the most afraid, I’d ever been and don’t asked me what happened over the next few days, because most of it is a blur.

RIGHT I’m digressing, so enough about this episode in my life –  I might write about it another time, in more depth.

The point I am trying to make is, the reason why “being sectioned in Middlewood” was the best thing that EVER could have happened to me was, because for the first time, (apart from first going in) I felt safe, no one could contact me.  I had the space to, think, reflect, non interrupted reflection, no one telling me what to do, or how or what to think! I had the time to think through what I really wanted, it was the first time in my life that I had the space to think about ‘ME’ what did ‘I want?’  more importantly what I ‘didn’t want‘.

I also become to realise and learn whilst in Middlewood, that the other people that were there,  was because they  also broken, they weren’t ‘MAD’ they weren’t ‘BAD’, life had just become too much, they couldn’t cope any more, they were just like me, or I was just like them.

The bottom line is the reason or story that had brought them there, whilst all were different and unique to them, they were here because they couldn’t cope with life ‘at that time‘. Being there allowed them ‘me‘ some respite from that wonderful thing we call life?

Since being released from “the NUT house” my life, hasn’t been easy, but ya know what? I’m still here. I am a different person, I think a better person and all because I’d started listening to what I “really wanted” not what was “expected of me!”

Not sure where people go to or are sent to now a-days to have a word with the sens? but I’m here doing it now and using this platform to reflect, make sense of what I want… you see I think (well I know) that somewhere over the past few years, I’ve stopped thinking about what ‘I truly want’ and im not talking materialistic stuff here, I’m talking the stuff money CANNOT buy, I’m talking about being happy and content with who I am.

So to everyone, who’s wondering ‘What the fuck is Tracey on with at the moment?’ I’ll tell ya, “Im basically having a word wi me sen”

But here I am writing and I don’t care

I do CARE though about ME, I am finally doing something for ‘ME’ which requires me to do a-lot #having a word wi me sen.

But theres no need to section me, (‘well ya can if you like, I would willing go, unfortunately I have a job to go to’) because I am the happiest I have been in a long time. So don’t worry about me mate, I’d spend your time and energy worrying about ya sen, and what YOU really want out of life?

So back to the heading

Is talking to yourself the first sign of madness?