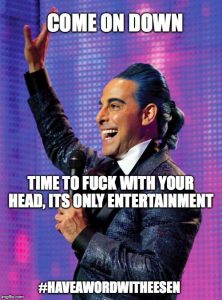 I was sat watching an episode of Big Brother  last night, it was eviction night, it dawned on me, that it was like watching a fucking futuristic version of the scene out of Hunger games, but without the killing! The basic rules of the Hunger games are

But before the actual eviction took place, the show took a look back on housemates previous recorded antics, which mainly involved hanging around the house, brushing their teeth, having a wesh, cooking, eating, getting dressed and I actually thought to myself “why the fuck am I watching this?”

But what struck me the most apart from the obvious, (that i was a sad fuck) was that the mental turmoil those three women, up for eviction were going through. Now don’t get me wrong here, I’m not saying that  they are victims? I mean they are supposed to be grown ass adults who can made their own decisions and have their own minds. But, you could see all three were riddled, crippled with self doubt. They were in the Diary room questioning, “what had they done wrong? Why had they been chosen? What had they said? What hadn’t they said? Had they been authentic enough? Had they been playing the game right?” .

Now I am all for wanting to be seen, to be heard, but not at the expense 0f someone else’s enter-fucking-tainment and what was even worse was “I was fucking watching it!”

I watched as Emma willis, the host of BB regaled and teased the audience with snippets of what lay in store for the un-suspecting housemates, fuck me it was just like watching

Caesar Flickerman, the host of the Hunger Games, but instead of vying for blood and death, she was gearing the crowds up for more character assassination. “YOU the audience have a chance to fuck with sad fucks heads in the house, just go to the BB app to find out how to do it!

I think its safe to say, that whilst I find human behaviour fascinating, and I love to watch reality TV, its safe to say that I will not no longer be watching BB ever again.