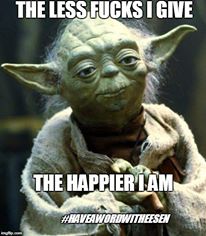 Its a paradox in itself, me saying “I dont give a Fuck” when in fact its quite the opposite,  I find I “Give many Fucks”, but often i can be giving a fuck about some things that arnt worth giving a fuck about! and that can be my problem.

After yesterdays post, i decided it might do me some good if i re-read the “subtle art of not giving a fuck”. which quite frankly would be near the top books i ever ever read, after, “the Lion, the witch and the wardrobe” which is the BEST book EVER, by the way

The last time i read it, was on me Kindle, as i was in a rush yesterday, i deceided to download the audio version and trust me when i say, its one of the better decsions i have made of late.

Mark manson, the author is fucking brillaint! he talks about the problem with society at the moment is that it is very much comsumer led, we are surrounded my articles, images of people who all seem to “have it figured out” and that its all a fucking illusion and he’s right!

Its not ok to “not be ok” in todays society and thats fucked up! – He’s right, when he ask, how many times have you found it hard to share with someone, even someone close to you that “your having a shit day?”.

In an attempt to avoid or escape the negatives in our lives, will only backfire and we do, DO IT, think about it?

The avoidance of struggle is a struggle

The denial of failure is a failure

Hiding what is shameful is itself a form of shame

listening to Mark, helped reinforce my view (which  i had been ignoring) and gave me a stark reminder that #Shithappens, and it does. It reminded me that when i talked yesterday of feeling distracted, it wasnt distraction, it was infact avoidance.  I had started to give fucks about things that didnt matter!

Shits going to hit the pan  at some point in my life, the best way of dealing with it, is to accept it face one and stop running me sen ragged trying to avoid the inevitable.

Life is full of fuck wits – you can chose whether or not the opinion of said fuckwits counts! If it doesn’t then you have a choice and you can chose to ignore it!

And its ok to be NOT OK!

Today though, up to now is OK, i have made some more headway with the book, writing a few more chapters this morning. I have meetings planned that are full of people who lift my soul. I have a meeting to go to later that quite frankly, i would prefer to to go, but i am because its important I go and I have said I will, so I am.

3 thoughts on “Learning to not give a FUCK- Again”