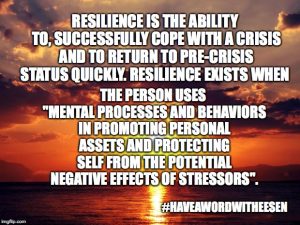 The word resilience has been mentioned a few times over recent days, so i googled it and here’s a definition I found

Psychological resilience is the ability to, successfully cope with a crisis and to return to pre-crisis status quickly. Resilience exists when the person uses “mental processes and behaviors in promoting personal assets and protecting self from the potential negative effects of stressors”.

Feeling pretty proud of myself today, I have been doing a little bit of reflection on where I was in myself, it was actually 122 days ago. I remember it well, I had just returned from an amazing chilled holiday in Greece for two weeks, I had had, two whole weeks away from the day to day stresses of family and work and I felt lighter, calmer, relaxed, chilled but there was something there niggling me, like an invisible ball and chain.  I knew that as soon as I returned to work, got back into the old routine I would be back to the same old stress head, running around trying to do and be anything and everything to others around me.

Whilst away on my holiday I had called my old Mate Mick Holmes to see how he was doing, I was sat on the beach, rubbing it in, whilst he was back on in Sheffield.  Don’t ask me why, but I had this urge, desire, need to have a catch up with Mick as soon as I returned off holiday. I couldn’t wait a week though, I needed to speak to him ASAP, so the day after I returned, there I was sat with Mick drinking hot chocolate outside a local pub in Ridgeway.  We talked about many things, Micks got his own shit going on too, it wasn’t all about me, but I shared about my fear of going back into old habits.

I shared my thoughts about being three quarters into my life, and actually even though it feels a long way away, its not, also I have lost people to illness (sudden illness) fuck me, Mick who I am speaking to, still doesn’t know if he’s got aggressive cancer, he’s in his fifties and I’m complaining about myself. whilst I loved my job and still do, it just felt that I was constantly giving, giving and not saving anything back for me!

I just want to be able to look back at 50 and say, yeh I turned up! I mean really turned up. Rather than sitting mopping around, waiting for the 50th party to come around, I can actually look back and say “you finished the book” and celebrate the achievement.

I was also sick of drinking the relentless habit of getting home on a Friday evening coming home, cracking open a few beers, followed with some wine with a meal of takeaway, but then waking up on a Saturday morning feeling shite then doing the same thing over again on Saturday night.  it’s no fucking wonder I’ve never done anything significant apart from the occasion inspirational attempt to get into a routine.- so I decided on having a month off the beer.

Mick said “you know they say, you need to create the environment you want” I knew what he was saying, but how? then I had a ‘lightbulb moment’  I have my own bedroom, why not change it, create my own space, a space for writing and being me? – Straight after meeting Mick, I was heading to Ikea to purchase a desk, notice board and nice plant for my new office

During my conversation with Mick, I got emotional, it was like I like I’d heard myself, really heard myself for the first time in a long time and I realized that there was no wonder I felt like something was missing, because I had stopped hearing or listening to myself. That hour chat with Mick was just the wake-up call I needed, I made a pact with myself that I was going to start doing something for me – so every morning for the past 122 days I have got up earlier to sit, write and reflect, “have a word wi me sen” and I can tell you its the best thing that I have ever done in years.

Just an hour a day, even if its 10/30 mins I make sure I do something for me, just take some time out to have a check in on me sen, I haven’t needed any fancy therapist, because I have learned that the best therapist we will ever have is ourselves. all we need to do is stop for a while, get off the roller coaster, we call life and #haveawordwioursens

My physiological and emotional resilience when dealing with day to day crap, either at work or at home have improved no end, I’m less stressed, I’m calmer, I’m able to think things through a little more rather than reacting and jumping into situations like a bull in a china shop. and as a result, I have never been so productive at work neither! BONUS

We only live once guys trust me, learn to stop listening to all the bullshit society throws at us on a fucking daily basis, its bleeding relentless and take some time out to listen to ya sen and work on your own resilience