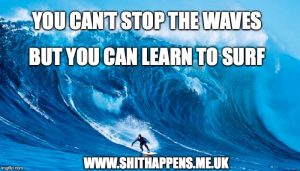 Yesterday was a day full of waves of shittyness but guess what I feel proud of myself because I rode that fucking wave regardless and managed to stay afloat whilst still maintaining to give the rods, two fingers to the previous wave that threatened to throw me into the sea.

Before I left the house I got a notification from a friend about an article in the local press that I had been quoted,  unbeknown to me there had been a member of the press at a cabinet meeting I had been presenting an update on a project I had been working on. I was very surprised that it was (for a change) pretty accurate (well apart from the fact the campaign starts next week, and the campaign has been running for over 4 years and not 1) but more importantly it was (I thought) positive and they got the fundamentals right, the message the narrative right.

“The key concept around Help Us Help is educating people about the different ways they can help the homeless, and it doesn’t all involve giving people money.”

“Finding yourself on the street can happen through a number of misfortunes and circumstances. Many of those providing support have been there themselves. Run by dedicated professional personnel and volunteers, these people never give up”

But I do often wonder sometimes if people have read the same article or do some people need an interpreter for fuckwits? “harsh I know, but just sometimes, sometimes this is how I have to refer to people who I think are practically unable OR worst even unwilling to think for themselves. So when it was brought to my attention that a select few from social media la la land, who quite frankly after working in this field now for 20 years I have never heard of were interpreting and questioning the article, I couldn’t resist..

What i did resist though, is reponding, reacting, making no attempt to justify and regardless of the waves of negativity and not reacting is what kept me afloat. Brain from the love sheffield page did a great job of asking some incisive questions, that fell on deaf ears, but thank you for your efforts Brian.

So after a busy morning of meetings, I decided to sit my ass down on a bench, re-read some of the comments, I rode the wave of anger that some generated, #hadawordwithmesen and reasoned with some facts

So the moral of my story is that despite being a fiesty bitch, sometimes even fiesty bitches need to #haveaword and say nothing, because quite frankly #shithappens and I recognised that this is just one of many shitty events I cannot change, just to make ME feel better, I had a choice about how I responded or reacted.

Working on recognising I am no Uri Geller and the only thing I can change and control is myself.