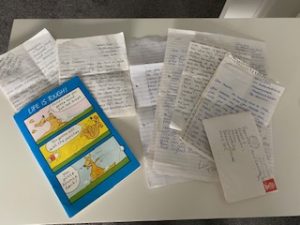 I try not to dwell on the past for too long. Over the years, I have worked hard at paying attention to the present in preparation for whatever the future may hold. That was until it came to writing this bleeding book. A couple of times, I found myself struggling to piece together fragments of my past. I was sure about most parts, but other memories eluded me, making me question if they had ever even happened.

But then something amazing happened last week. I’d arranged to have a belated birthday meal/catch up with one of my oldest friends, Shauna. She’d called earlier on that day and excitedly told me that her mum had come across a carrier bag in her garage full of letters and cards that Shauna had been hoarding over the years and that in that bag included some letters sent by me. The funny thing is, I only recall sending her a card once, and it was well before being sectioned. At the time, she was away from home, away from family and friends, and struggled to complete her gruelling RAF training. I vaguely recall sending her a card by way of encouraging her to stick at the training, but the rest is a blur, probably because my life at that time was a complete blur too.

She was properly excited when she called earlier on that day ‘Oh Tracey, I had read through some, but I can’t find “Theee One”‘ I was confused? ‘What do you mean “The one”‘ She sighed. ‘You know the letter that you send after we lost touch?’

Then I remembered there was almost a year when I had lost touch with Shauna, as it was around when I was losing touch with myself. I remember it was a few months after coming out of Middlewood that I’d finally managed to track her down, She’d been stationed in York after her basic training, but I don’t ever recall sending her a letter. She ended the call promising to keep looking and that she would bring the letters around to mine later that day.

I was so excited, the writing on the book has slowed down, but it had slowed down around this point in my past. Shauna arrived later that day, and I couldn’t wait to read the words, to recall where my head was almost twenty-nine years ago.

There were six letters in total. The first three are from before I was sectioned, and the other four were after I’d started a fresh slate. It was like reading letters that two very different people had written. One by one, the first three letters  transported me back to a time when I was incredibly lonely. Just seeing the desperation in my words made me feel sad about the woman I used to be.

I thought I would share some of the snippets from the letters and a little commentary on what was happening at the time.

Letter 1 – ‘It’s 6.09 am, and I can’t sleep. “I wonder why?”‘ – But I knew why. I was always on the go, somewhere to be. I’d started to become more reliant, dependant on the amphetamine. It felt like the only thing that helped me get through each day.

‘He came in at 5,30 Sunday morning, but I didn’t get mad, I’ve changed my attitude’ – I’d started to get used to him coming in at all hours, I’d given up, trying to get my head around accepting his unacceptable behaviour.

‘I might be hard on the outside where XXXX is concerned, I’ve always backed down for a quiet life, but from now on, if I want to go out, I’m going to make sure I don’t have to ask him for any money and go, what’s good for the goose is good for the gander and if he doesn’t like it then tough shit! ‘– Money was always an issue in our relationship, in that he liked it but didn’t like working for it. Well, that is until he started bringing in money from his drug dealing. I had worked throughout our relationship. All my earnings went into the house. It had always been “what’s mine is yours” for years, but when he started earning, it was a case of “what’s mine is mine”. Money had just become another way of him being able to control me.

Honestly, Saturday, I felt so low. It just was not me at all. You can only take some much, can’t you? This letter lets you know fordys back on form, and no blokes make me feel like that, especially when I’m so good to him. – When I first read this, I smiled. I liked the determination in my words’ Fordys back’, but then I read the words surrounding them, I realised I was far from being back. If anything, I was going backwards. At that moment, I was emotionally transported back in time. Back to a woman I no longer recognised and yet knew so well.

Letter 2 – ‘Sorry it’s been a while. I could be a millionaire the next time you write. I’ve been selling fake t-shirts, only started with 20 now I’m selling hundreds. Never mind, I can’t complain. I am writing this at work because I don’t have time to piss at home. Trying to save for a new car’– This was a good period in my life and working full-time at the markets. I’d made a great contact via collecting some drugs one day. Her name was Toni. She fenced loads of gear at the time, fake, knock off, you name it, there wasn’t anything she couldn’t get her hands on. I spent a lot of time at Toni’s, it was an open house, and I would visit a lot, sometimes taking the kids with me. It became my safe space, a respite from the shit I was going through at home. I admired Toni. She was like the big sister I never had, she had a strong sense of resilience about her, and like me, her old man did as he pleased. He was barely around when I called around, but that didn’t stop her from earning her own money, being her own independent woman. I was earning enough money to do as I pleased and after saving for driving lessons, I passed my test, the first time, by the way, which is a good job, because they were skinting me. This meant I could purchase my very own car. I opted for an old battered red fiesta; it had a sunroof that leaked, but I didn’t care. I had seen it a few times on my way into work, before i plucked up the courage to speak to the car dealer. it had a sign in the window £250. I negotiated a payment plan on the condition he had my drivers license until it was paid. – That turned out to be a good contact because the lads who worked for him started buying their drugs off me too.

Letter 3 – ‘Have been a bit down, lately sick and tired of running around wheeling and dealing, but I know it needs to be done otherwise I’d never get any money’ – I’d thought that getting a car might make life easier, but in fact, it got busier, I turned into his personal taxi driver, gofer – I would often worry about being caught in possession of the drugs I was collecting on his behalf.

‘He does my head in, I try and say as little as possible, but I still manage to say something to ruin his weekend’ and ‘I am suffering from bad mood swings’ -This is the last letter I send Shauna before plunging into a very dark place. I now know that the mood swings were just the beginning of my slippery mental, spiritual demise. According to the consultant, I had what appeared to be three mini breakdowns, which had caused the drug-induced psychosis.

“The letter” that Shauna was referring to was next.

Letter 4 -The first thing I noticed was that my handwriting was completely different compared to the other letters. I could never remember the exact day I was admitted into Middlewood hospital, but I’d made mention of it in the letter. I start by apologising for not being in touch and explaining why

‘I’m back a college now for three years, and I love it! I’m doing a social science access course and just started a counselling course. I am resitting my GCSE’s, English and maths. I am hoping to work in drug rehab or probation.’ –I smiled at my words and looked up at Shauna, who smiled knowingly and said, “I know, amazing isn’t it?’ I couldn’t disagree, the letter went on

‘I went really low Shauna when I went in Middlewood I weighed in at 7 ½ stone, was a size six, I was in a right state. I thought the devil was after me and the lot. I can laugh about it now; I don’t know how I have come back so well. Put it this way. It has changed my life and me as a person.’

There were three more letters. The tone is the same. I am more positive, optimistic about my future and nothing like the woman in the first three letters. Those letters were one of the best Birthday presents Shauna could have ever given me, a slice of my past, written by myself. They just reinforced my belief that everything happens for a reason and why I have absolutely no regrets. After all, had I not experienced what I had, I would never have been the person I am today. – I just wished I was closer to being 7 1/2 stone.

Thank you, Shauna, for the letters, but more importantly, your friendship over the past twenty-nine years. I look forward to celebrating our thirtieth anniversary in style in 2022.

And to all of you out there who may be struggling, never give up. You never know where you might be in a year or years. Just make sure you stay as true to yourself as you can, keep loved ones close and treasure those friendships (even if it’s one or two people).

And if you haven’t tried it yet, try capturing part of you in writing, capture everything, including the dark times, because it is the best feeling in the world to be able to look back and see just how far you have come.

Reyt, I’m off -and remember, try not to be afraid of who you truly are, be proud of your recovery and remember, if you would like to receive post as soon as they are written please subscribe I promise i will NEVER send you any spam, i’m not into all that shit, I just like to write!