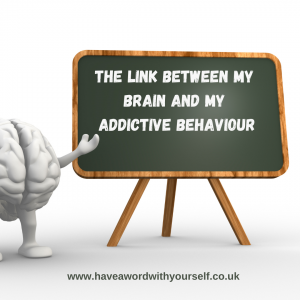 What started, as a release became more of a habit. Unbeknown to me at that time, my repeated drug use was secretly rewiring my reward circuits in my brain, which had started to interfere with my ability to resist taking more. Which eventually turned into a dependency, or also known as addiction.

Looking back, I can now see clearly how the habit developed. At the time, it seemed like an easy way out of “a quick win”. A way of coping with my emotional and mental anguish and some of the shit going off around me at that time in my life. But what appeared on the surface a harmless release quickly turned into that at that time caused untold misery on my mental and emotional health.

Everyone’s “rock bottom”, “awakening”, or ‘Ta Data” moment is different, and that is because everyone is different. Eventually, my drug use developed into drug-induced psychosis, causing me to lose my mind. Any rationale I might have had vanished, I was empty, I didn’t have the mental energy to think, let alone speak, the drugs had well and truly burned my brain. It was well and truly frazzled. I quickly realised that to recover from this place I was in, that “I” had to make some profound changes.

I always share that my recovery journey has been a journey of self-enquiry. As a kid, I remember I questioned EVERYTHING around me. But I RARELY questioned myself, or my thinking, that was until I started my recovery journey. I’d never considered the link between my brain and my compulsive behaviours, that was until I started learning more about myself and understood the research more, let me explain…

Drugs affect the brain’s “reward circuit,” causing euphoria and flooding it with the chemical messenger dopamine. A properly functioning reward system motivates a person to repeat behaviours needed to thrive, such as eating and spending time with loved ones. Surges of dopamine in the reward circuit cause the reinforcement of pleasurable but unhealthy behaviours like taking drugs, leading people to repeat the behaviour and repeatedly turning into dependency/addiction.

As a person continues to use drugs, the brain adapts by reducing the ability of cells in the reward circuit to respond to it. This then starts to reduce the high that the person feels compared to the high they felt when first taking the drug—also known as tolerance. (Meaning that they want to take more of the drug to try and achieve the same high) These brain adaptations often lead to becoming less and less able to derive pleasure from other things they once enjoyed, like food, sex, or social activities. Source

The brain is one of the smallest organs in our body, yet it’s the most complex part of our anatomy. It gives meaning to things that happen in the world surrounding us. Through the five senses of sight, smell, hearing, touch and taste, the brain receives messages, often many at the same time. Source

I’m still amazed at the number of people who take their brains for granted, especially when it’s the main organ that determines how as humans, we respond to stressful situations. But then again, I was one of them; it took me years to figure out that I had a brain, let alone use it to its full potential! The brain is where all the magic takes place, or should I say black magic, which is happening when you are using.

So, what have I learned?

Well learned early on that I wasn’t anything special, which was both a shock and a relief—realising that I wasn’t alone and the only person who failed to see the almost invisible fine line between habit / addiction? In, 2015 Australian researchers released the first-ever report on worldwide addiction statistics. They found about 240 million people around the world were dependent on substances! So take some solace in knowing you are not the only one to have fallen into the addiction trap!

I started giving myself a break – I stopped beating myself up

Look dwelling on the past will only distract you from focusing on the present and future. Think about it this way? How can you beat yourself up for not knowing in the past what you know now? Start learning to understand how it’s the rewiring in your brain that has just gone a little AWOL, start getting your head around how our habits can develop into an addiction.

I fed my brain – Get off social media and read some real shit! There are millions of books and resources out there that can help you figure out YOU, do your research, get learning. For many, they think that they are somehow flawed or faulty, that they lack moral judgement, when all that’s happened is that they have lost themselves, gone “off-piste” as they say in skiing. One of the very first books I read was Susan Jeffers. Feel the fear and do it anyway  It really helped me understand and manage my self-esteem. I also love the work of Nancy Kline, who talks about understanding how we think, she wrote  Time to Think

I became ALOT more Self-aware or, as I’d say, “I started havin a word wi me sen” Getting to know yourself, building a relationship with yourself is critical in early recovery. And let’s face it, you know you better than anyone. Practice some mindfulness. Researchers have studied several different ways that the brain has adjusted back to a “baseline” level during and after addiction treatment. A 2013 study published in the journal Psychology of Addictive Behaviours found that incorporating mindfulness and meditation into addiction treatment could lessen the risk of relapse. The study also indicates that brain pathways that can trigger relapse can be retrained by mindfulness practice. One of the best books I have read in a long time is a book by Jay Shetty – Think like a monk

I write it out – Writing for me has become my personal therapy, I have written about this previously Start with the heading “how am I feeling?” and take it from there. It doesn’t matter if it doesn’t make sense to anyone else, just as it makes sense to you, help yourself, try releasing your mental burden by writing it out.

I dropped the labels –especially the negative ones, I’ll admit, I can still be affected to this day by labels given to me as a kid.  But you are not a nut case, a waste of space, a low life, you’re not flawed, you aren’t any of these, you are just human. But, once you start to understand labels, you can learn to discard the negatives and create some new positive ones

Hindsight (or refection) – often sarcastically referred to as “being a wonderful thing”, but it actually is! Start examining how your habits might have started, developed. What triggered it? What was happening at the time? What was your environment like? What were your relationships like? What were you thinking? How did you feel? Become your own private detective, try to separate your behaviour from you, take a step back and look in on your life from another angle, examine the cues, cravings, and rewards that drive the behaviours and then find ways to replace their self-destructive routines with healthier alternatives. Addressing behaviours by modifying the habits surrounding them has been shown, in clinical studies, to be one of the most effective modes of treatment in recovery

I sought out others  in the same boat – As I mentioned earlier, you are not alone, and you are certainly NOT unique. This is when support groups can really help. Having a safe space to offload and bounce off ideas, to talk about your triggers, cravings can be invaluable. Support groups are a great place to think, to reflect, surrounded by others who understand. If you are in Sheffield, head over to Sheffield Recovery Community FB page or go to Sheffield DACT for a list of local treatment providers.

If you are not ready for a group, call a helpline. There are people willing to listen, without judgement, no pressure, to help you work through what’s on your mind, reach out to the Samaritans  Its FREE, Its confidential and its available 7 days a week.

Listen, there is no time like the present as individuals to start taking back some ownership and to truly get honest with ourselves regardless of whether you have had a problem with drugs or whatever else it might be? But remember, there are no quick fixes, self care requires time, a bit of discipline, support, and patience.

Remember I don’t write for financial reward or gain, I just want to help share my lived experience with others in the hope that it helps. And I just love to write, so if ya fancy getting the occasional email with the most up to date blogs from yours truly, please feel free to subscribe at the bottom of the main page.