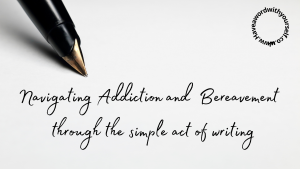 For years after Dad’s death, I would often dream of Dad. Unfortunately, most felt more like nightmares. The most common one was that he was alive, but I could never work out how? The memories of his burial would be clear as day in my mind, stood by his grave, throwing in a single red rose, the last single act of love, onto his coffin. And yet, in my dreams, he would be alive and well (well, not all the time).

There were a few dreams when he was nothing like the Dad I remembered. He lived contently in his flat, at Norfolk Park. It would always be clean. There would be no evidence of drink, and yet I would feel a pang of overwhelming guilt for not visiting him as often as I could.  The worst were when he was in drink; these dreams would leave me feeling exhausted, he would be in total denial. He would be a happy drunk and buying everyone drinks with money he didn’t have, or he could be downright nasty.  He had a vicious tongue and would often blame me for his drinking.

I would often awake, sweating, my heart rate would be racing, and for a split second or two, I would question if he was still alive and if the previous two years had all been a dream. Some mornings it would take me some time to compose myself and reassure myself that it was just a dream.

Dad passed over 16 years ago, but he’s still very present. All I have left is a shoebox filled with some of Dads belongings.

I still have his Passport,  issued in 1998. In his photo, he appears to be sporting a shiner. He has a look of a football hooligan. In the event of an emergency, he’d put his mother’s name and contact details, which at the time was when she was residing in Hayle, Cornwall.  I have no idea who the second person is; his name isn’t familiar. All I know is that he was male and lived at an address at Walkley, in Sheffield.

I still have his rent book; there are five stubs proof of payments made.  I can tell Dads writing because apart from his signature, he almost always wrote in capital letters. I’m surprised to notice that his last payment was made on 27th January, it’s in his handwriting, three months before he passed.

I once had a Birthday card. It was signed by Dad, I’d made a point of saving it, but I cannot find it. I have no idea where it lives. I hope someday that it will magically reveal itself – but for now, I console myself in the knowledge that he’d taken the time to write me one. The act alone means a lot.

I have a copy of his death certificate. We registered his death on 22nd March 2005, two days after he passed. It states his occupation as being a Licensee. It contains my name and contact details; I am mentioned because I am his Daughter and was present at his death.

The cause of death: Officially, the cause was Pneumonia. However, if he had not already had Decompose Alcoholic Liver Disease, he would have undoubtably survived the bout of Pneumonia. A stark reminder death is more likely to occur as an indirect consequence of drinking and not the act of drinking itself.

I have a letter from the council, a receipt for his burial and the deeds for exclusive rights for his burial spot, which expires and needs renewing after 30 years. At the end of the letter, there are the contact details of bereavement services available to me. I never took them up on the offer.

I don’t own a single picture of Dad and me together. The only pictures I have are of him drinking in a pub with friends or another family.  I have a couple of photos, but none are originals, only photocopies gratefully given to me by family following his death.

I have a copy of the Sheffield Star, dated 23rd March, Page 33, under the heading Family Notices. Dad’s name stands out at the top of the page, just under the heading ‘Deaths’ surrounded by other names of people I don’t know.

I have the documents appointing me as trustee of Dads financial affairs, dated 11th October 2004. Dad signs it, but his signature is barely eligible.

I have his old tan leather wallet that contains an out of date T Mobile top-up Card and a Gas and electricity payment cards. Inside his wallet, there is a small purse. It contains a single shopping receipt from Somerfield, dated 4th December 2004. He’d purchased some Rover biscuits, two lots of Kaliber (alcohol-free lager), two cheese pastries, a pack of six Yorkshire puddings, a pack of stewing steak, a six-pack of Double Decker’s, apples and bananas. On the back of the recipe is some more ineligible writing containing numbers, which must have meant something for him at the time. The alcohol-free lager is another reminder of his attempts to stay clean. If I smell his wallet for long enough, I can almost smell him again. I can still touch something that he frequently touched, a treasured possession.

I have a pair of Dads reading glasses, and they take pride and place in my office. They still manage to make me smile. They resemble the ones that Deirdre Barlow used to wear on Coronation Street. He’d acquired them off one of the other patients whilst in hospital. I tried suggesting that he give them back, but he’d been adamant the previous owner didn’t need them anymore.  To this day, I still don’t know where they came from?

And finally, I have a shoebox full of notebooks, each containing hundreds of works, written by myself, mostly in my darkest moments. I had wanted to turn them into a book for years, it has been like an itch that wouldn’t go away. I think I was and am still angry; I don’t want Dad’s death to be in vain. I don’t want others to fall into the same trap as he did. I also wanted to share my story to remind people affected by a loved one’s addiction that it is ok and perfectly normal to feel sad to feel angry, let down, frustrated, resentful and hurt.

Our writing doesn’t always have to make sense.

Sometimes it saddens me that I don’t have more mementoes to remember Dad by, but the sadness doesn’t last long because I have something more unique, and that’s the memories. Weirdly since attempting to write this book, I haven’t suffered from any of the nasty nightmare’s, which is a testament to the power of writing. Writing for me has turned out to be a form of therapy. It is a safe space where I can process all my conscious thoughts and all the hidden subconscious feelings and emotions that no longer plague my dreams.

I am two thirds into finishing the book, which has proved a lot harder than I first anticipated. Ironically, recalling memories of Dad has been easier than recalling the memories about my own addiction.  But thankfully, after a lot of anger, tears, self-doubt, and support from friends, loved ones, and my peers from my writing group, I finally managed to piece together a painful past into a jigsaw puzzle I can finally understand and come to terms with.

I don’t know where today’s blog has come from, and to be honest, I’m not sure what point it is I’m trying to make. But then again, writing doesn’t always have to make sense.  All I know is after sat writing for the past two hours, I feel at peace. I feel content. Writing is more than just pretty words. The act of writing is to share a part of your soul with the world, share part of yourself with someone other than yourself.

I might not write well every day, I might not write as much as I need to reach my self imposed target, but as the saying goes, ‘You can always edit a bad page, you cannot edit a blank page’ Author unknown.

Honestly if anyone had said to my younger self  ‘Tracey you’ll be a writer some day” I would have laughed and told em to “Fuck off”. You don’t have to be published to be a writer, there is much more to writing than books.

Fordy’s top tip for anyone who is feeling low or unsure of how you are feeling is to write it out?

Start with the heading “how am I feeling?” and take it from there. It doesn’t matter if it doesn’t make sense to anyone else, just as it makes sense to you, help yourself, try releasing your mental burden by writing it out.

Remember I don’t write for financial reward or gain, I just want to help share my lived experience with others in the hope that it helps. And I just love to write, so if ya fancy getting the occasional email with the most up to date blogs from yours truly, please feel free to subscribe at the bottom of the main page.

One thought on “The therapeutic act of writing”